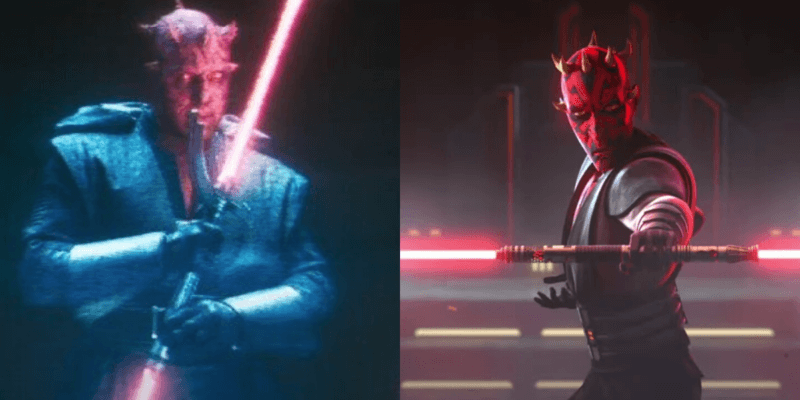 When Darth Maul had his holographic cameo at the end of Solo: A Star Wars Story, fans were in shock to see the former Sith Lord in that position of power. But one of the biggest questions they asked was “How did he get there?” Now, Star Wars: The Clone Wars has helped answer that question.

The computer-animated series set within the prequel trilogy between Attack of the Clones and Revenge of the Sith tells the stories behind the Clone Wars in greater depth as well as expands the Star Wars Universe. One of those stories centers around the reemergence of Maul, Palpatine’s former protege.

We catch up with Maul in Episode 10 of the final Clone Wars season, titles “The Phantom Apprentice.” Previously, Star Wars fans learned that Jedi Master Obi-Wan Kenobi did not kill the Sith Apprentice in The Phantom Menace, and after being revived by Mother Talzin, he would go on to make deals with the galaxy’s crime syndicates, and then take over the entire planet of Mandalore.

After a confrontation with Darth Sideous, fans are left to assume that Maul was dead. But it turns out that Sideous kept Maul alive and he claims to take credit for orchestrating the siege underway on the planet.

While Maul loses the battle, fleeing Mandalore for his life, he gets captures by Ahsoka Tano, His Mandalorian reign is over but his underworld connections are still intact.

When Darth Maul begins his conquest with his now-deceased brother Savage Oppress, he makes deals with Lom Pyke of the Pyke Syndicate, Prince Xizor of the Black Sun, and Dryden Vos of Crimson Dawn. These are already well-established syndicates, and one of which has the same name as the one from Solo. Maul knows the Republic is coming to an end and Emperor Palpatine will take control. By partnering with the syndicates, he seeks to build himself into a place of power within the new order.

Currently, the show has Maul captured by Republic forces. There are still some episodes left, and there is no doubt Star Wars fans will get some hint as to how Maul escapes custody and goes on to become a Crimson Dawn crime lord.

It should be noted that we are only discussing the timeline in the Star Wars cinematic universe. That is, the Star Wars Canon found in the TV shows and the movies. One can hope whatever hints we are given could set up another potential movie or show that can fill in the gaps between The Clone Wars and Solo, and even Star Wars Rebels.

We will find out soon enough.

The series finale of Star Wars: The Clone Wars premieres on Star Wars Day (May the 4th) only on Disney+

What do you think about Darth Maul’s storyline? Would you like to see more of it? Let us know in the comments!

Comments Off on Want to Know How Darth Maul Fits in “Solo”? Watch “Star Wars: The Clone Wars”