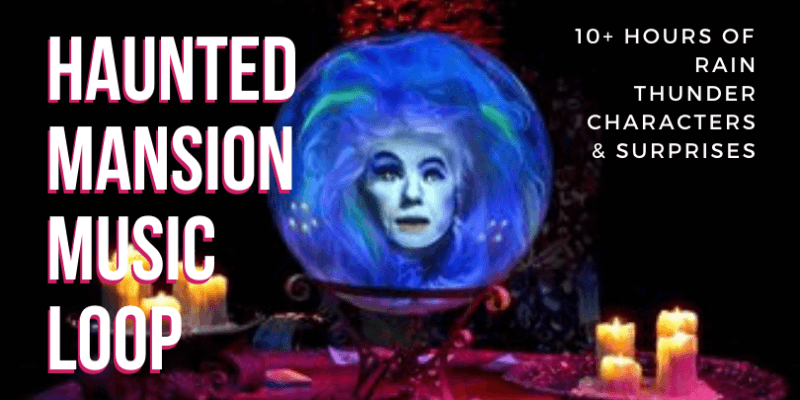 “When hinges creak in doorless chambers, and strange and frightening sounds echo through the halls. Whenever candlelights flicker where the air is deathly still — that is the time when ghosts are present, practicing their terror with ghoulish delight!”  Our Ghost Host reminds us that this is a special place, full of delights, surprises and more. And delight you shall, when your haunted ears and spectral soul catch wind of this ambient loop of The Haunted Mansion music, 10 whole hours at a time. You’ll find not only the Disney superfan music below, but also some more graveside looks at the grinning ghosts! 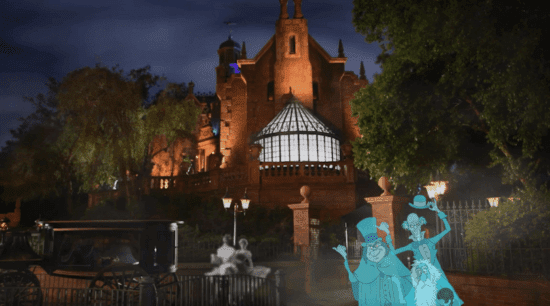 Thanks to a YouTuber by the name of Disney Dan, we spectral-wannabes can treat our mortal ears to the famous organ music of Disneyland’s Haunted Mansion peppered with soft thunder, lightning and special hauntings from our favorite spirits. Happy Haunts materialize during your initial journey through the portrait gallery, as rain and lightning set the scene behind you, and famous apparitions appear before you. Not only a treat for the ears, but your eyes will also sharpen as you find the forms of doombuggies, the Phantom Five, and even Constance standing before you…

Disney Dan’s video goes for a full ten hours; a feat by any standard. Mirror it to your television or Alexa device for a full day of creepies, crawlies, and toads in a pond. While you won’t hear the famous Ghost Host narration, you will listen to clips by Madame Leota, the new audio-animatronics of Constance Hatchaway, and the singing busts of the Phantom Five. These grim grinning ghosts are ready to come out to socialize, so be sure to watch as well as listen.  You can support the artist’s efforts on all his loops by visiting his T-shirt shop or donating to his Patreon. This helps artists like Dan to continue to create amazing treats for us.

Perhaps soon Disney Dan will start on an ambient Haunted Mansion Holiday loop involving the best parts of Tim Burton’s Nightmare before Christmas! Since The Haunted Mansion first opened in 1969 in Disneyland, the attraction has grown to involve one of the largest Disney Parks fandoms, spawning merchandise, collectibles, accessories, and more. It’s no wonder that awesome audio tributes like this one are part of the fan art created in honor of The Haunted Mansion. You can find slightly different versions of the attraction in Disneyland, and Magic Kingdom in Florida. Overseas, a theme park such as Hong Kong Disneyland offers a haunted mansion attraction spinoff in the same vein called Mystic Manor.

For more Haunted Mansion music, you can find Madam Leota’s Haunted Mansion music box on the shopDisney website, creepily detailed with lace, mansion purple, and a sculpted Madame Leota on the lid. When you wind up the music box, you can listen to Grim Grinning Ghosts as many times as you please, played by a tiny chime. Available for under $40 right now, the ghostly music box is a sweet score for your afterlife loving home.

You can find some amazing details in the tombstones of both the Disneyland and Walt Disney World Haunted Mansion queues. Inside the Magic reported on tiny hidden references to Imagineers hidden in plain sight. Many of the RIPs and epithets on the Haunted Mansion tombstones are actually tributes to the participants that Imagineered the attraction. Think of it as artistic signature graffiti! Disney’s Haunted Mansion is one of the Disney theme park’s most popular attractions, and one of the last ones that Walt Disney himself personally oversaw before he passed away in 1966. 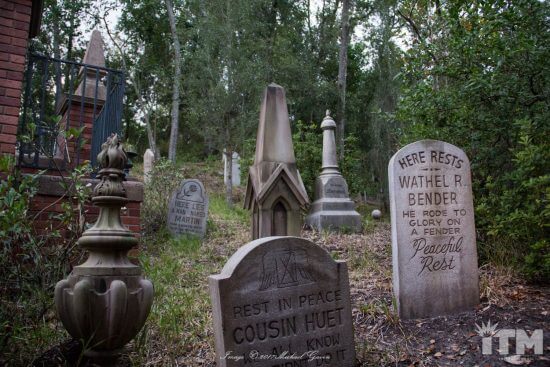 Dooney & Bourke also brought “boo-tiful” new Haunted Mansion 50th Anniversary merchandise to that swinging wake celebration! For fortunate mortals with reservations for the attraction’s 50th Anniversary event, three opportunities were given to purchase the prized possessions. You may still be able to find them on resale, but they are beautiful to look at, nonetheless.

Would you join the Ghost Host in his haunted house? These happy haunts are looking for you. Leave us a comment below about your Haunted Mansion fandom!

Comments Off on Soothe Your Supernatural Soul with Hours of Haunted Mansion Music, Thunderstorms, & Surprises