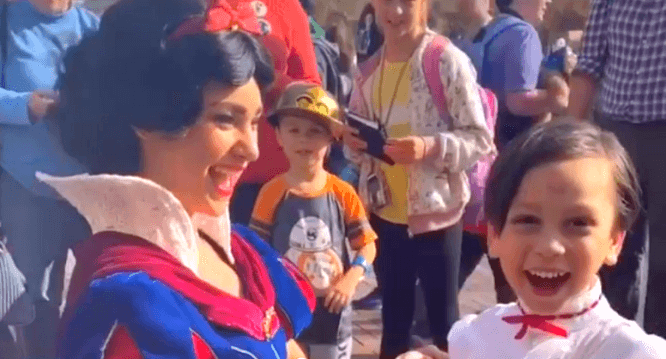 Have you ever had a magical moment with a Disney character? As Parks fans, most of us have. You may have had more than one special moment with a character, where they made you laugh with a question, were kind in a moment of sadness, or brought you back to your childhood with some goofy dances.  This one special encounter showed the true kindness of this Snow White as she greeted a child with both Autism and Microcephaly. Watch her patience and attention shine as she greets this little boy named Evan.

No, that headline isn’t a quote from a Disney Princess. It’s a small piece of text type implanted on a Tik Tok video by Eeka, the mother of Evan. Adopted from foster care, Evan suffered from severe drug exposure in the womb, which caused his issues including microcephaly and autism. Despite his challenges, Evan is happy and thriving at home as he lights up each room he walks into. Eeka works tirelessly to teach Evan what appropriate social interaction (including personal space and boundaries) looks like. He still struggles with these concepts as he tests on the Autism spectrum at a severe level.

Eeka explains as her video rolls that when Even gets excited, he often forgets boundaries and can become rough with the characters in his fervor. On this particular day, a lady came to work, donned a Princess dress as Snow White, and had the fortune to meet with Evan in the Theme Park. What happened in those few moments of interaction was a pure treasure to Eeka, and we can feel that love, too! Eeka tells us that Snow White never wavered in her patience and understanding, for which Eeka was grateful. Evan thought of her as real, true and kind.  Watch the embedded Instagram post video below from @californiadisneyfam.

Some people are just born exuding kindness…this woman is one of those people ❤️? ••• Negative comments will not be tolerated, so if you have an issue with this video or for some reason think he’s not being taught boundaries then please leave our page. As a reminder, Evan has autism AND microcephaly. Two MAJOR diagnoses. Most of us will never know what it’s like to face a world of intolerant people with the kinds of struggles he deals with everyday. He was beyond excited in this moment and sincerely believes that these characters are real. Thank you for your understanding ? . . . . #snowwhite #disneyprincess #disneyfamily #disneymoms #disneygram #disneymom #disneyland #disneycaliforniaadventure #happiestplace #happiestplaceonearth #annualpassholder #disneyannualpassholder #disneygirl #disneymagic #disneylove #disneycharacters #instadisney #disneyig #disneylandresort #dlr #disneyinsta #disneykid #disneykids #abc7eyewitness #disneybound #disneyfriends #disneyblogger #tiktok #magichappensatdisneyland

Snow White Meets with an Autistic Child with Microcephaly

“Thanks to the magic of these amazing characters and cast members,” Evan has come a long way in his social interaction journey as a child with Autism and Microcephaly. Eeka wants readers to know that while she understands change can be a slow process, she hopes that people can realize that boys can wear any article of clothing they want, just like girls can. She tells Inside the Magic that Evan loves his dresses because they make him feel good and proud of himself. Evan is the one that makes the choices regarding his clothing styles, and she will continue to support him. This editor, for one, is a big proponent for any child, boy or girl, visiting Bibbidi Bobbidi Boutique! Perhaps Evan may find his way there way day for a magical makeover.

Other Magical Encounters with Disney Characters

Jackson, who goes by Jack-Jack, came out of his shell shortly after his diagnosis with autism thanks to the original princess, Snow White. This meet and greet between Snow White and an Autistic Child opened the door to more magical encounters for this little dude!

Likewise, a 9-year-old girl from Fresno, who was diagnosed with both cerebral palsy and visual impairment, met with Chewbacca in Disneyland to magical results.

And we know you’ve all seen this little Rey guide characters back into the Star Wars Launch Bay and use the force to stop the Dark Side. Candace Harmon’s little girl, Vanessa, is so obsessed with “Star Wars” that she even gets into character when she dresses up. She insisted on being called Rey on this day she spent in Hollywood Studios.

In honor of Galaxy’s Edge opening to the public this month at Hollywood Studios, I wanted to reshare this AMAZING experience we had with Vanessa.⠀ ⠀ She was chosen to fight and protect all of us there at the park. There were some close calls, but she used the force with all her might (ok, except she was waving at the bad guys ?).⠀ ⠀ I can’t wait to see what other experiences my little Rey will have once we enter Galaxy’s Edge! We will definitely be dressing them up soon! ⠀ ⠀ #starwars #starwarscosplay #starwarsfans #starwarslife #starwarslaunchbay #disneyobsessed #disneycosplay #disneybound #disneyaddict #disneystyle #disneygram #disneyside #disneylove #disneyparks #disneylife #disneymagic #instadisney #disneyvideo #galaxysedge #abc7eyewitness #hollywoodstudios #disneyinsta #hollywoodstudios30 #disneyfamily #disneyfanatic #disneyaddicts #ohmydisney #disneyfun #waltdisneyworld #disneygrammers

No matter what your position in life, the Disney characters can always awaken a bit of magic in your soul. They help us understand ourselves in just a few minutes of interaction. Children with social or medical issues, adults with anxiety, families with scads of nieces and nephews. Best Friends, Girls Trips, First Visits and repeat Parks Lovers. We all line up for a special visit and a hug from an unconditional love that we cherish.

What kind of magical character interactions have you had at the Disney Parks? Leave us a comment below!