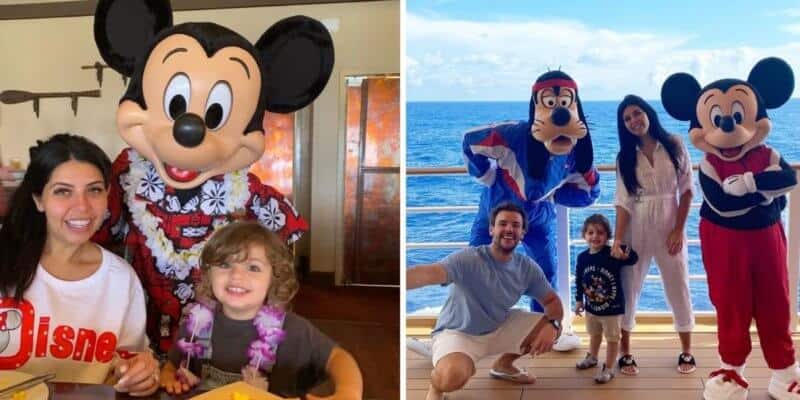 A reality star is now speaking out about her trip to Disney in Florida (and after her recent Disney Cruise vacation) and her decision to stay in their Orlando hotel despite everything going on in today’s world.

2016 Love Island winners Cara De La Hoyde, who is currently expecting (you can see her baby bump in the photos below), and husband Nathan Massey, who are from England, are currently staying at their hotel in Orlando, Florida, after their recent trip to Disney. With them is their little baby boy, Freddie, as their family vacation was cut a bit short due to the temporary closure of the theme parks.

But because the reality star decided to stay in Orlando instead of flying back home to England during this unfortunate time of self-isolation, the couple is receiving a lot of backlash from her fans.

Warning: Some of the following content may include foul language.

One of her fans stated on social media “It’s a d**k response that people thought this was no big deal and went on vacation. People canceled funerals and weddings and they were like f**k it were going to Disney that’s irresponsible. That’s why people are dying. I’m allowed to be upset.”

But this isn’t stopping Cara from standing behind her own decision. In fact, she states that she feels safer in Orlando than back in her hometown in England.

“Everyone’s entitled to their opinion I just happen to not agree with yours and I’m allowed that opinion also. And I feel a lot safer here than in England so I won’t be rushing home,” she stated.

This isn’t the first time Cara’s followers and fans attacked her decisions via social media as she is currently expecting and traveling on a Disney Cruise and recently visiting Walt Disney World, which some people didn’t tend to agree with. One person commented on a picture of Cara and her family alongside Mickey Mouse saying “It’s a global pandemic and they’re saying people won’t no symptoms are testing positive. This is so irresponsible. For goodness sake, you’re pregnant!”

The reality star didn’t let this get to her and she calmly responded with “Thank you for your concern, what I do with my family is my concern. Please stay safe.”

The bright side is that not all of her followers are attacking her. Some of them are actually backing her up and standing by her side. One fan even said that they would actually prefer to stay in Florida as well instead of returning to “the madness in the UK.”

“The amount of messages I have from people saying how nice it is to see anything other than the madness of the world right now makes me happy with my decision. Stay safe,” Cara said.

What do you think of the decision to stay near Disney World during this time? Let us know your thoughts in the comments.