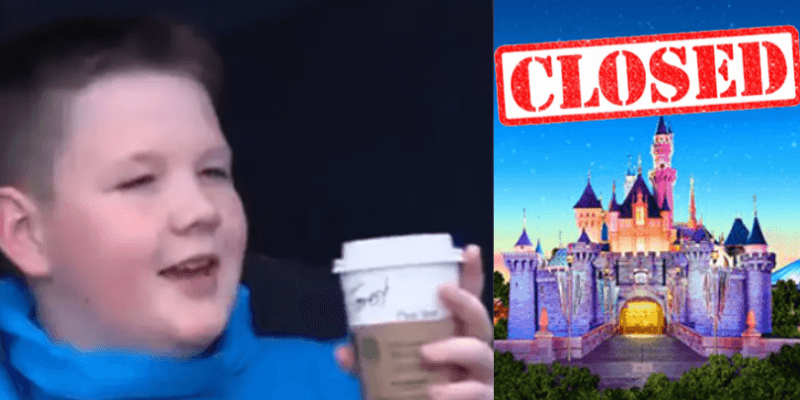 While we’re happy Disney is taking necessary measures to protect guests and Cast Members from coronavirus, we’d be lying if we said we weren’t sad that the Disney Parks have temporarily closed. But one kid had the best, most adult response to the park closures that we’ve seen yet.

A FOX 11 video clip shared by Los Angeles Times reporter and University of Southern California professor Arash Markazi shows a young boy named Elias Sharf’s response to the Disneyland theme park closures this week. In the video, we see Elias holding a Starbucks cup, wearing a Mickey sweatshirt, and holding his umbrella on a rainy Southern California Day. He says, in the most realistic and adult-like tone, “[Disneyland’s] closing for the whole month, and we come from Canada. Took a long trip to get here,” before taking a sip from his Starbucks drink.

We don’t know about you, but this video definitely cracked us up — it’s realistic attitudes like this that can get us through these park closures. Yes, it’s disappointing that we can’t go to Disneyland right now. But this Canadian kid’s response to the whole situation is pretty darn awesome.

You can watch the video clip featuring Elias from Canada below:

This Canadian kid's response to not being able to go to Disneyland this weekend is the best thing I've seen today. ? pic.twitter.com/wrXfaQmCdo

An extended clip was also shared. In the video, the interviewer says to Elias, “It’s going to take a lot of coffee to calm you down.” To which Elias smiles and replies with a simple, “Yeah.”

My friends at @FOXLA just posted the extended clip of the interview, which further cements this kid as a legend. ? pic.twitter.com/jKbfKTuQ20

The latest news from officials regarding Disneyland Resort’s closures indicates that much more will be closed than was previously announced. Disneyland park and Disney California Adventure park are temporarily closed, along with all three hotels at Disneyland Resort — the Disneyland Hotel, Disney’s Grand Californian Hotel & Spa, and Disney’s Paradise Pier Hotel — and the Disney owned and operated storefronts at Downtown Disney.

We know that this is a tumultuous time for everyone in the world, and we continue to keep everyone affected by coronavirus in our thoughts. We hope that this kid’s response to the theme park closures brings a smile to your face. If you need more positive content to brighten your day, check out the articles linked below.

From All of Us at ITM: Thank You, Disney Cast Members, For Everything!

Bring the Magic Home With Under $35 Items During the Disney Parks Closure!

‘You Can Go the Distance’; The Most Inspiring Movies on Disney+ to Get You Through This