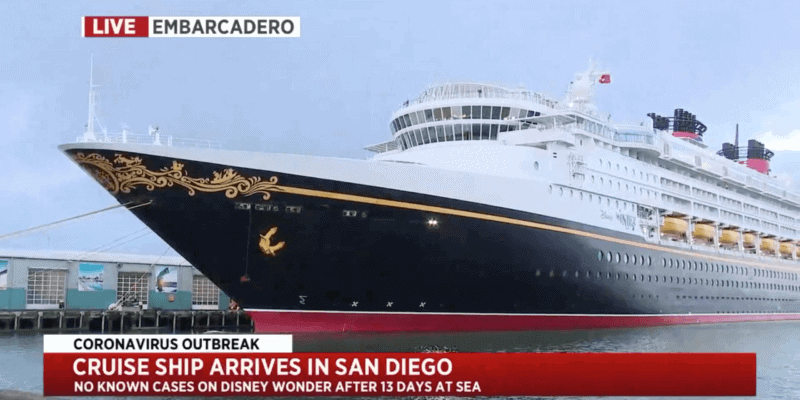 The Disney Wonder docked at the San Diego cruise terminal on the morning of March 19, and officials are happy to report that none of the 2,000 passengers and 900 crewmembers show any symptoms of the novel coronavirus known as COVID-19.

The Disney Wonder is the last of the Disney Cruise Line ship to complete its last sailing before all operations are postponed until April 12. That means, as of now, Disney Cruise Line was able to sail into full precautionary shut down without any of its ships becoming hotbeds for the spreading infection.

The Disney Wonder left New Orleans for its 13-day/14-night Panama Canal cruise on March 6, 2020. The final destination was always San Diego. This is a one-way itinerary that has more of a logistical purpose than a leisurely one, as the ship is leaving The Big Easy behind for its new scheduled homeport of San Diego. All cruise companies have these one-way sailings that cover such long distances.

Normally, the cruise ship itinerary features several exotic ports of call including Grand Cayman, Puerto Vallarta, and Cabo San Lucas. But in this special case, the Disney Wonder elected to forego shore excursions on this voyage.

“Disney has assured the Coast Guard, the CDC, San Diego County health officials, and the Port of San Diego that no passengers are exhibiting any COVID-19 symptoms but it will continue to monitor passengers and crew members for any changes.

In order to minimize passenger and cruise exposure to the coronavirus, Disney Wonder representatives told port officials that the ship opted to skip its calls after leaving New Orleans on March 6. By the time it arrives in San Diego early Thursday morning, passengers and crew members will have been aboard the ship for 13 days.”

It’s been no secret that the close quarters of cruise ships have proven to be the perfect breeding ground for COVID-19. The Diamond Princess and the Grand Princess cruise ships proved to be two major epicenters themselves. However, Disney Cruise Line maintained strict heath precautions, refusing to board any would-be passengers who had been to any of the highly infected countries in the past 14 days before sailing.

Those precautions appear to have paid off as ALL passengers were expected to disembark from the ship this morning. There is no word yet if any of the passengers will seek testing despite not showing any symptoms.