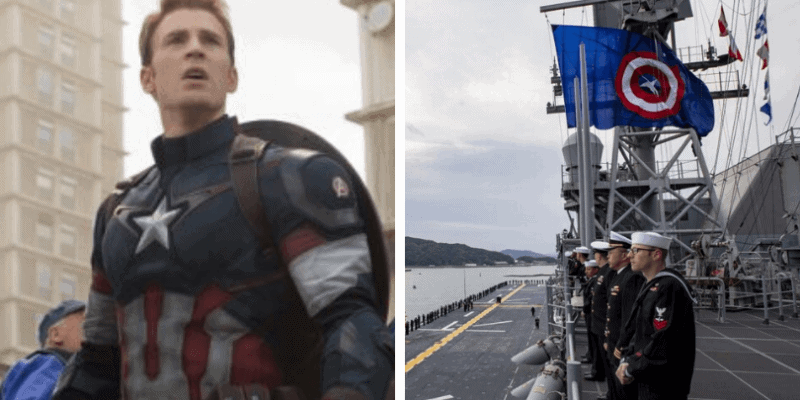 This is about as patriotic as it gets. The crew of the USS America (LHA-6), the first of a brand new class of amphibious assault ships, chose to have Captain America‘s shield as its battle flag.

Also known as a house flag, the crew made the choice just before they and the ship were deployed to the Indo-Pacific sometime late last year.

“The iconic Captain America symbol — the First Avenger for this first-in-class fifth-generation amphibious assault ship — was the perfect fit,” said Capt. Luke Frost, the ship’s commanding officer. He added that the flag choice was a “bold, graphic, with a clear patriotic and easily-identifiable association with the name ‘America.'”

LHA-6 is the fourth Navy ship to be given the name America. The first was the first 74-gun ship of the line ordered for the Continental Navy. The second was a troop transport vessel and the third was a Kitty Hawk-class Aircraft Carrier. Now it passes to this ship jacked with a crew of both Navy and Marines and more than a few F-35B Lightning II Joint Strike Fighters.

The Navy’s tradition of a Battle Flag has a storied history. “From Oliver Hazard Perry’s ‘Don’t Give Up the Ship’ flag at the Battle of Lake Erie to George Dewey’s ‘FIGHT!’ flag in the Battle of Manila and into the modern era, battle flags or ‘house flags’ have been used to motivate, rally, and inspire ship’s Sailors and Marines,” said the America’s CO. “These flags express unit pride and the fighting spirit of the crew.”

Now it should be mentioned that Captain America wasn’t in the Navy. Comic creators Joe Simon and Jack Kirby made him an Army Captain who went to Europe to almost single-handedly dominate the Nazis and other Axis powers. After taking part in a secret lab experiment, Steve Rogers was injected with a special serum to become America’s first supersoldier. Still, I doubt he’d disapprove.

Captain America became one of the principal characters of the Marvel Cinematic Universe and his movie provided the set up for The Avengers. A spinoff series The Falcon and the Winter Soldier is scheduled for Disney+.