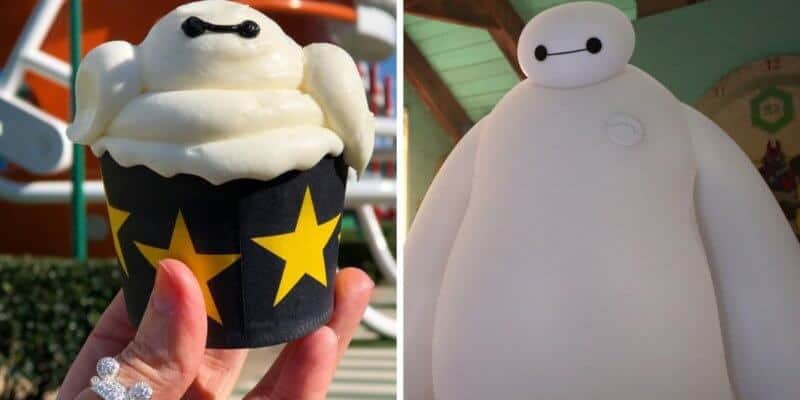 Disney is known for creating adorable foodie items — inspired by some of our favorite Disney Characters. From Mickey shaped pretzels to Stitch themed Dole Whips to Mickey Mouse cupcakes, Disney is always serving up some adorable themed snacks and sweet treats.

And now, yet another new Disney cupcake has made its way into the Disney Parks. If you are looking for your next must-try sweet treat, you’ll want to head on over to Disney’s All Star Sports Resort at Walt Disney World.

We found this Disney cupcake at Disney’s All Star Sports Resort at Walt Disney World.

Recently, Disney released a new Gus Gus themed cupcake in honor of Cinderella‘s 7th anniversary. To this day, the Gus Gus cupcake remains one of the most popular (and adorable) cupcakes on property.

The chocolate cupcake is topped with Peanut Butter buttercream icing on top. The famous Gus Gus hat is a vanilla blue buttercream frosting and the ears are made of fondant. The cheese on the side is made of white chocolate.

The Gus Gus Cupcake is $5.99 or one snack credit on the Disney Dining Plan. You can read more about the Gus Gus cupcake here.

Another must try cupcake is the Citrus Honey Flavored Bee Themed Cupcake, which we spotted not too long ago over at Disney’s Animal Kingdom.

The new sweet treat consists of an orange cake filled with a sweet honey custard. The cupcake is then topped with buttercream icing, chocolate pearls, white chocolate honeycomb and two sugar bees (how cute!) You can read more about this new Disney cupcake here.

If you want to try this new Baymax cupcake on your next Disney World vacation, but aren’t sure where to begin planning — Don’t hesitate to reach out to our friends at Academy Travel.

These Disney vacation specialists will be there with you every step of the way — From booking your resort reservation to helping book dining reservations, even offering tips and tricks so you don’t miss out on any of the Disney magic! Click here for a free, no-obligation quote and start planning your next Walt Disney World Resort vacation today!

Do you want to try this new Disney cupcake? Let us know in the comments.