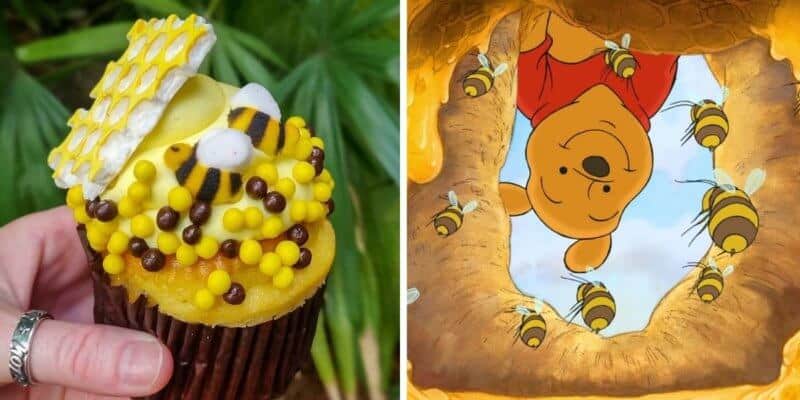 We have a sweet treat alert! (And if you are a fan of Winnie the Pooh, you may want to head over to the Disney Parks).

It looks as though Disney’s Animal Kingdom is celebrating bees as they have just released a new bee themed cupcake, which is a must-try in our book!

The sign which announces the Bee cupcake reads “Without the help of bees and their pollinator friends, we wouldn’t have foods like fruits, vegetables, and chocolate. As bees fly from plant to plant, they bring pollen with them that helps more plants grow!”

If you are a fan of citrus flavors and sweet honey, then this is Disney cupcake is calling your name. Let’s dive in and take a closer look at the new Disney cupcake:

Oh my!! ? Check out this new Citrus flavored #DisneyCupcake found at Starbucks in Disney’s Animal Kingdom! It’s a yellow cupcake filled with citrus cream and topped with an adorable bumblebee and honeycomb. Definitely a winner is my book! ? (A huge thank you to @jackieguss and @dismomknows for telling me about this one!) . . . . . #DisneyCupcakeDiva #DisneyCupcakes #DisneyFoodie #DisneyTreat #DisneyTreats #disneyDining #AnimalKingdom #SpringCupcake #BumblebeeCupcake #disneysnack @waltdisneyworld

The new sweet treat consists of an orange cake filled with a sweet honey custard. The cupcake is then topped with buttercream icing, chocolate pearls, white chocolate honeycomb and two sugar bees (how cute!)

It has been reported that this new Bee cupcake costs $5.99 and was found at both Restaurantosaurus and Starbucks at Disney’s Animal Kingdom, so keep those eyes peeled if you want to try it!

Do You Need Help Planning Your Next Walt Disney World Resort Vacation?

If you want to visit Disney’s Animal Kingdom on your next Walt Disney World Vacation to try the new Bee themed cupcake, but are having trouble getting started with the planning, be sure to get in touch with our friends at Academy Travel. These Disney vacation specialists will be there with you every step of the way. From booking your resort reservation to helping book dining reservations, even offering tips and tricks so you don’t miss out on any of the Disney magic!

Do you want to try the new Bee cupcake? Let us know in the comments.