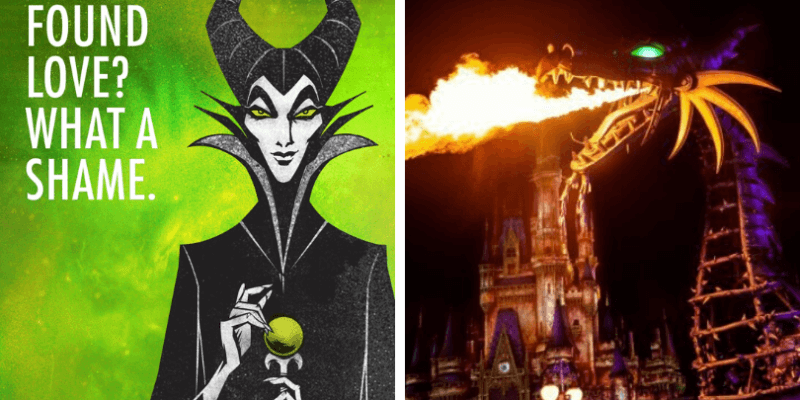 Valentine’s Day is this Friday, Disniacs, and if you are still looking for a way to make this year’s holiday unforgettable, look no further than the Walt Disney World resort.

No, wait. This will not be your cliche romantic Cinderella moment. On the night of February 14, the Magic Kingdom will host its second Disney Villains After Hours event and tickets are still available! Disney’s Contemporary Resort will also get in on the Villainous Valentine’s Day fun by offering a special selection of dastardly desserts that lure us in like Aurora to her spinning wheel. The Contemporary Resort will host its Villaintine’s Day on February 13.

The excitement is so intense at Walt Disney World, they even released official Villaintine’s Day cards:

On February 13, 2020, the Contempo Cafe at Disney’s Contemporary Resort will feature a villainous variety of treats that combine the lovey-dovey sweetness of Valentine’s day with the dark, dastardly, and sinfully indulgent aura of Disney Villains. No reservation is required to partake in this event!

According to Disney, here is the full list of Desserts that will be offered:

These desserts are only available on Thursday, February 13, so try them while you can before they all vanish back to their secret lairs.

Disney Villains After Hours at the Magic Kingdom

Villains, treat your Evil Queen to a Valentine’s night she will never forget, and experience Disney’s Baddies like never before!

From 10 pm – 1 am on Valentine’s Day, the worst of Disney’s characters will take over the Magic Kingdom Park for the second “Disney Villains After Hours” event. Villains in attendance will include Maleficent’s Dragon, Dr. Facilier, the Oogie-Boogie Man, Cruella DeVil, Lady Tremaine, and Ursula.

They invite you to join in on their festivities which include a Disney Villains parade called The Villains’ Cursed Caravan, and a Castle show called Villains Unite the Night. The Villains even captured a DJ to give their guests a villainous dance party, and they are offering some unforgettable drinks and sweet treats of their own!

Tickets are still available for this Valentine’s Day Soiree for $145 plus tax online and $155 plus tax at the park gate. You do not need to purchase a normal park admissions ticket to be admitted into the park, and a $30 discount is available for all Disney Vacation Club Members and Walt Disney World Annual Passholders.

Book Your Walt Disney World Vacation and Join the Party

Disney Villains After Hours events will be held at the Magic Kingdom from now until July 10, 2020. If you are looking to book your next visit and join the party, our friends at Academy Travel are ready to help. They know what it takes to give you the best possible deal on your next Walt Disney World trip and add the Disney Villains After Hours event into your itinerary as seamlessly as possible. Click here to learn more and receive your free, no-obligation quote today.

Are you going to take part in Disney World’s Villain-tine’s Day celebrations? Would you want to if you had the chance? Are you going to try and attend the Disney Villains After Hours event at the Magic Kingdom? Let us know in the comments!