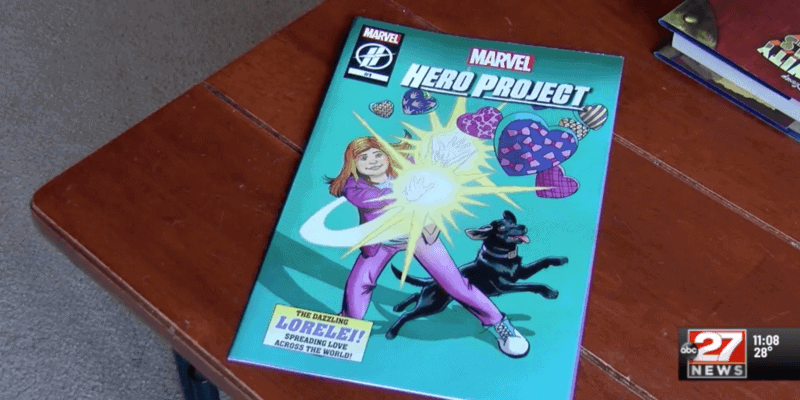 Lorelei is a young 14-year-old teen from Duncannon, Pennsylvania who was diagnosed with a critical congenital heart defect. But despite this diagnosis, Lorelei is still living life to the fullest and is not allowing her heart defect to define her.

In fact, she is the newest Marvel superhero and her Marvel Hero Project episode titled Dazzling Lorelei is now streaming on Disney+.

But of course, every superhero needs their sidekick so Lorelei made her service dog, Mandu, her first sidekick in the series! In fact, Mandu has saved Lorelei’s life twice already.

“He can tell if my heart is about to stop. Only about two dogs in the world can do that,” said Lorelei McIntyre-Brewer.

Lorelei went on to discuss how much being a Marvel superhero means to her. “I love being part of a group of a bunch of kids that help out their communities,” she said. “I love helping. It’s one of my favorite things to do in the entire world.”

Her goal is to raise awareness about heart health and has been traveling the country in order to do so. Lorelei is currently working with Wounded Warriors in honor of her two uncles.

“There have been kids who have needed heart surgeries but they couldn’t pay for it, so she did fundraising to pay for it,” Lorelei’s mother, Chelle McIntyre-Brewer, said. “For families who lose their children to these very complex congenital heart defects, she will send them these beautiful ornaments and handwritten letters.”

Lorelei began heart hugs at just five years of age and to this day, she has raised more than $200,000 for children battling heart issues. Heart hugs is an initiative to create pillows for children all around the world, helping to ease their pain. “The kid who receives the pillow puts a lot of love into it and receives comfort and love,” Lorelei said.

“You can have this kid here whose doing amazing things and changing lives but you also need to realize we may not have her tomorrow and so we need to take advantage of everything she has to offer, when she wants to offer it to us,” said Chelle McIntyre-Brewer.

You can stream Lorelei’s episode of Marvel Hero Project on Disney+ now. If you are not yet signed up, you can subscribe here.

According to Marvel, Marvel Hero Project will be a “20-episode series which shares the remarkable, positive change several young heroes are making in their own communities across the country.”

This is a Marcel series which is made to celebrate the little differences that young inspiring kids do each and every day to give a positive change. It also is made to inspire others to go out and do their own part in this world to make it a better place.

Have you gotten the chance to watch Marvel Hero Project on Disney+ yet? Let us know in the comments.