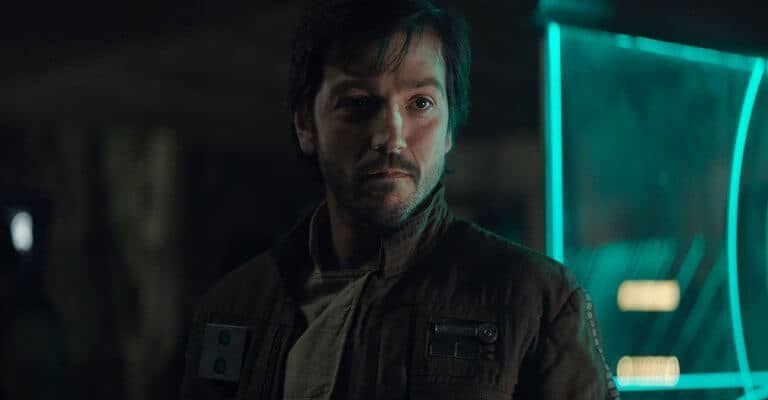 “Yes, we are doing it. We are doing it this year,” Actor Diego Luna recently told ET in an interview about the upcoming Star Wars: Rogue One spin-off. “It’s happening, and I’m getting ready for it.”

Star Wars fans should get excited as Luna was recently interviewed by ET about season two of his Netflix series, Narcos: Mexico. During the interview, the upcoming Star Wars: Rogue One spin-off was brought up in conversation.

Unfortunately, Luna knows “very little” about the series and what to expect, but that doesn’t mean he is any less excited about the project. He has even read some scripts already and said that he “can’t wait”.

“I’m really excited,” Diego Luna shared. “It is really cool to tell a story where you already know the ending.”

Diego Luna did share a bit about what Star Wars fans can expect with the upcoming Star Wars: Rogue One spin-off. “It is a different approach because of the beauty and it’s how things happen. It’s not just what happens. It’s not the typical way of approaching a story. It’s about how things happen, which in fact, is the same that happened in Rogue One. You know the ending, but you don’t know how it happened, and we have that challenge in front of us again, which is exciting.”

Over a year ago, it was announced that Star Wars actor Diego Luna will be reprising his role of Cassian Andor in an upcoming Rogue One prequel series. It was originally planned to begin filming last year, but looks like the project was delayed. Though, we now have confirmation that the Rogue One prequel series will in fact begin filming this year.

The Rogue One prequel series will star Diego Luna as Cassian and Alan Tudyk as droid K-2SO.

In the meantime, Star Wars fans can look forward to some of the other upcoming Star Wars projects on Disney+, including The Mandalorian, which is set to debut season two in October 2020, as well as season seven of Star Wars: The Clone Wars.

Unfortunately, Star Wars fans will have to wait a bit longer to see Ewan McGregor’s Obi-Wan Kenobi series, as production has been pushed back to 2021 and it is currently reworking its scripts. It was recently reported that the head of Lucasfilm Kathleen Kennedy wasn’t happy with the scripts for Ewan McGregor’s Obi-Wan Kenobi series so it is now on hold “indefinitely”.

If you are not yet signed up to the Disney streaming service, Disney+, you can subscribe here.

Are you excited for the upcoming Star Wars: Rogue One prequel spin-off? Let us know in the comments.

Comments Off on Confirmed: “Star Wars: Rogue One” Prequel Series To Begin Filming This Year