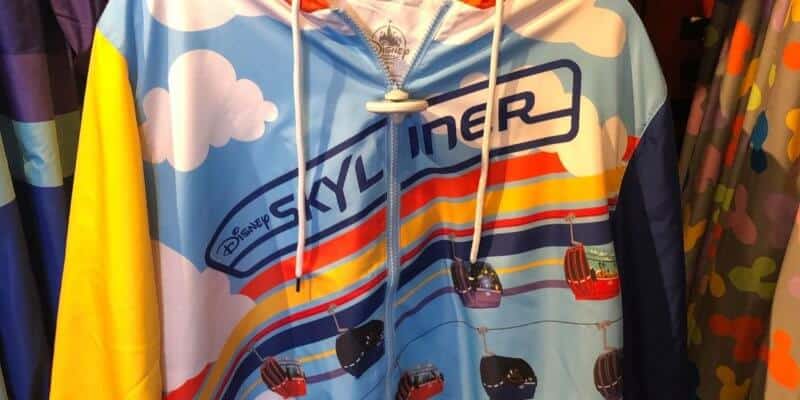 Since opening last year, the Skyliner has been an incredibly popular way of getting around Walt Disney World for guests, it’s almost counted as another ride at the resort!. Merchandise has also been fantastic with t-shirts, Funko Pop!, and even toys. Well, now we can add something else to the list of must-buy Skyliner merchandise, the Skyliner windbreaker!

Retailing for $49.99, this Skyliner windbreaker will certainly mean that nobody is going to miss you when out in the rain, it’s incredibly colorful! The jacket features a sky blue color with white clouds and lots of different variants of the gondolas that you can see whizzing past various Disney parks and resorts in Walt Disney World.

Take a more detailed look at this awesome windbreaker below:

It looks like Disney has used some of the more popular gondolas in this jacket with characters from Toy Story, Star Wars, The Haunted Mansion, and the main mice, Mickey and Minnie Mouse all featured. If you’re looking to look stylish in the parks and keep out of any light rain, this is the coat for you for sure.

There isn’t a day that goes by where I don’t wish to be traveling high above the skies of Walt Disney World on my way to Epcot or Disney’s Hollywood Studios and although I’m incredibly scared of heights, I absolutely loved the Skyliner when I tried it for the first time back in October and can’t wait to go on it again next time I am in Disney! I still think it would be great for the Skyliner to arrive at the Magic Kingdom and Disney’s Animal Kingdom — and you never know, it could happen in a few years!

This would also be a good chance for Disney to add other popular characters to the gondolas, anyone for Baby Yoda? I love all the new outerwear that Disney continues to release at the parks, especially at this time of year when it can get a bit chilly in the evening!

Will you be purchasing the Skyliner windbreaker? Let us know in the comments below!