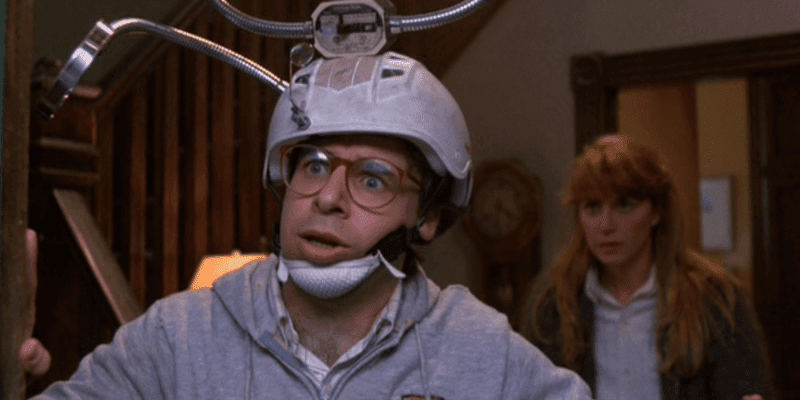 According to the Disney film blog The DisInsider, Disney is in talks with Rick Moranis to bring back the original star for an upcoming reboot of the film — which will just be called Shrunk.

If you’re unfamiliar with the original 1989 movie, here’s a brief synopsis:

When kids sneak into inventor Wayne Szalinski’s (Rick Moranis) upstairs lab to retrieve an errant baseball, his experimental shrink ray miniaturizes them. When Szalinski returns home, he destroys the device — which he thinks is a failure — and dumps it in the trash, throwing out the kids along with it. The four children, now 1/4-inch tall, must survive the journey back to the house through a yard where sprinklers bring treacherous storms and garden-variety ants stampede like elephants.

It has also been reported that the new film Shrunk is set three decades after the original took place (so present day) and Josh Gad will be playing Szalinski’s son all grown up.

Keep in mind that nothing is confirmed yet by Disney, so we still don’t know much about this reported reboot. But still, we’re pretty excited whenever we hear that stars of original Disney films and series return for the rebooted or updated versions of movies and shows. Hilary Duff came back for the new Lizzie McGuire on Disney+, and we all agree that that’s what dreams are made of. So if Disney is making a new version of Honey, I Shrunk the Kids, why shouldn’t Moranis return for it?

For now, you can catch the original  Honey, I Shrunk the Kids on Disney+.

Are you excited to see a modern-day version of  Honey, I Shrunk the Kids? What do you think of Moranis possibly coming back to reprise his original role? Let us know in the comments.

Comments Off on Disney Might Bring Back Rick Moranis for “Honey, I Shrunk the Kids” Reboot