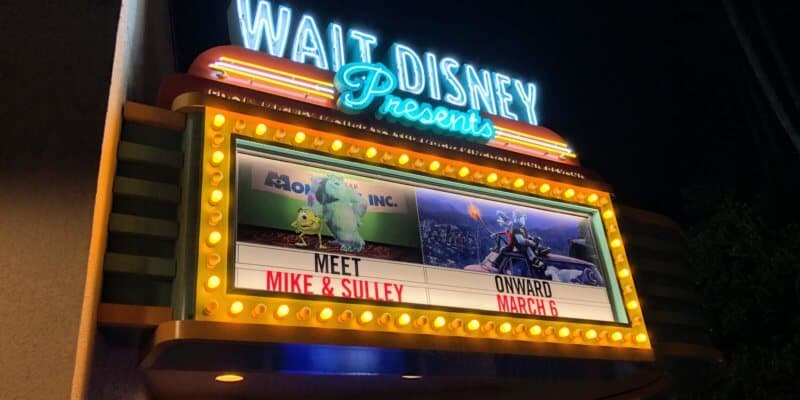 If you happen to be wandering out of Toy Story Land in Disney’s Hollywood Studios, don’t forget to look up as you round the corner near Walt Disney Presents.

The Marquee clearly illuminates an Onward opportunity coming March 6th. The photo below was taken by one of our writers on February 17th, 2020, before Mike was rumored to abandon Sully (the Walt Disney World page has already removed Mike).

You can already find merchandise, books, and plushes in the souvenir stores as you shop the Disney Parks. It’s only fitting that the new film would give us this opportunity to meet Barley and Ian just like we did Moana!

Do you love meeting with characters in the Disney Parks? Here at Inside the Magic, we know there’s pixie dust sprinkled on every interaction we visit!  When it comes to the latest and greatest meet and greets, or even those with rare characters, we know you love them, too. From a now-deleted sneak peek on an Instagram feed, what you’re looking at is not an animation slide… it’s costumes! Are we getting an Onward Meet and Greet at a Disney Park?

It’s common knowledge that “temporary” meet and greets are installed into Disney’s Hollywood Studios in advance of movie premieres. Think of Moana, Star-Lord, and Baby Groot! It would be no surprise to see an Onward meet and greet with guests, and we’re stoked at the thought of meeting Ian and Barley in real life!

These new arrival costumes look to be a lot like Joy: a shaped top with sculpted elements and fabrics. They are so proportional to the film that I nearly thought this was a slide from the movie! It would be cast a pretty magical spell on us to see these guys on our next vacation!

Possible Onward Meet and Greet with Ian and Barley

Tipped off by a Pixar employee’s Instagram feed, the now disappeared post showed costumes for what appeared to be a new meet and greet. The Pixar Post shared the images, but sadly the feed has since changed. Meet and Greets for upcoming movies are often put into place on the way to Toy Story Land in Disney’s Hollywood Studios, so we’re wondering if the current Mike and Sully Meet and Greet will change in favor of the Onward brothers, Ian and Barley.

Recent news of Mike Wazowski being removed from the Monsters, Inc. Meet and Greet inside Walt Disney Presents is another possible clue towards the shift to Onward. While Sully is rumored to be meeting with guests starting February 23rd, we’re wondering if Ian and Barley will replace him soon!

While Disney Parks has yet to make an official announcement,  the Pixar animation character appearance could coincide with the March 6, 2020, theatrical nationwide release of the film.

You Can Also Visit with Guinevere, the Van from Onward

The Pixar Post YouTube channel recently posted an in-person tour of the Guinevere Van from Onward. They got some excellent glimpses of it when visiting the Pixar Studios in California. Touring to many U.S. cities before the movie debuts, you can see Guinevere in person in cities like San Diego CA, Scottsdale AZ, and possibly Dallas, New York, Miami, and possibly others.

While the Unicorn van has been the subject of a recent lawsuit, the fallout has been pretty amazing, as an artist’s “Vanicorn” was used as inspiration for the film, and the artist was none too happy about it.

Here at Inside The Magic, we’re certain that Onward, an original story from Pixar, will pack a punch. The movie is clearly about loss and was inspired by the director’s childhood as Dan Scanlon shares that he lost his father when he was just a tyke.  “As Dan explains once you introduce a world of magic and magical creatures and spells the stage is set for the impossible (return of your loved one) to become possible.”

Chris Pratt recently went on the record saying that Onward would leave grown men in tears. Pratt’s statement on twitter after the screening wowed audiences and left many saying it was their favorite movie ever. That’s a tall order for the feature film‘s opening on March 6th!

Catch the Onward Trailer here or embedded below. The vocal talents lent to this film from the Marvel Universe actors is really special and highly entertaining. I have a feeling I’ll be glued to my seat with magic the entire time! You can also get glimpses of all the character posters on our post from last month. It might give you more clues about the quest storyline or insight to the Manticore!

Comments Off on UPDATE: It Looks As Though An Onward Meet and Greet Is Coming To Disney Parks