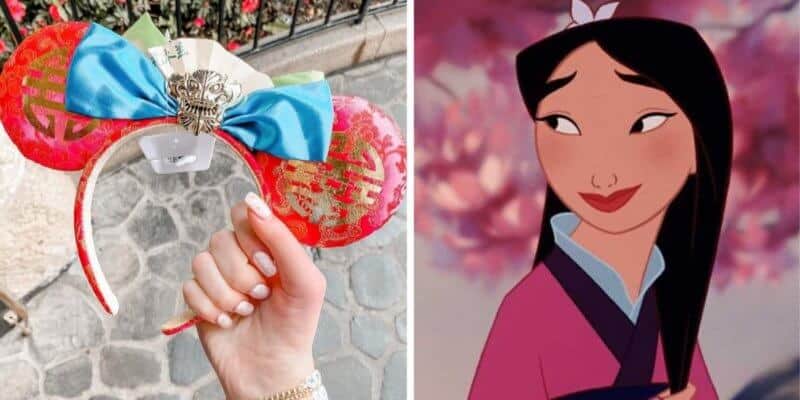 The upcoming Disney live-action Mulan film is expected to be one of Disney’s biggest films of 2020. And now it looks like the Disney Parks are gearing up for the release of the highly anticipated live-action film with new merchandise inspired by Mulan!

Disney Parks has just revealed the latest pair of Minnie Mouse Ear headbands and they are a must have for all Mulan fans. We are already in love with these ears, and we think you will be too. Let’s dive in and take a closer look at the Mulan inspired Minnie Ears, which recently made their debut in the theme park.

More new ears?! You heard it here! — These new Mulan ears hit Disneyland this morning! What do you think??

The new Mulan Minnie Mouse Ears have a red silky flower print on both the headband and the ears themselves. The sparkle sequin gold embellishment on the front helps to make the ears pop.

In the middle, a bright blue bow sits along with a green bow placed directly behind. In the middle of the blue bow is a silver dragon charm.

Some people are taking issue with the new ears as in Chinese culture, men who wear green on their heads is a sign of humiliation. If a man is seen wearing green on his head, it means he has cheated on his partner.

We spotted these new Minnie Mouse ears inside the theme park at Disneyland Resort, but keep those eyes peeled because we expect these to pop up in Walt Disney World Resort as well.

If you haven’t yet read about the upcoming live-action Disney film, take a look at the official description below:

The upcoming Mulan live-action film will not be a remake of the beloved Disney animated film. In fact, the upcoming film will be much more realistic and based on authentic Chinese culture. It will not be based around comedy or music like the animated film was. Director Niki Caro stated in an interview:

If you want to visit Disneyland Resort on your next family vacation, but aren’t sure where to begin planning, then don’t hesitate to reach out to our friends over at Academy Travel. Click here to get your free travel quote today, and to get started planning that next magical Disney vacation.

Do you love these new Mulan themed Minnie Mouse Ears? Do you plan on visiting the theme park to snag a pair? Let us know in the comments.