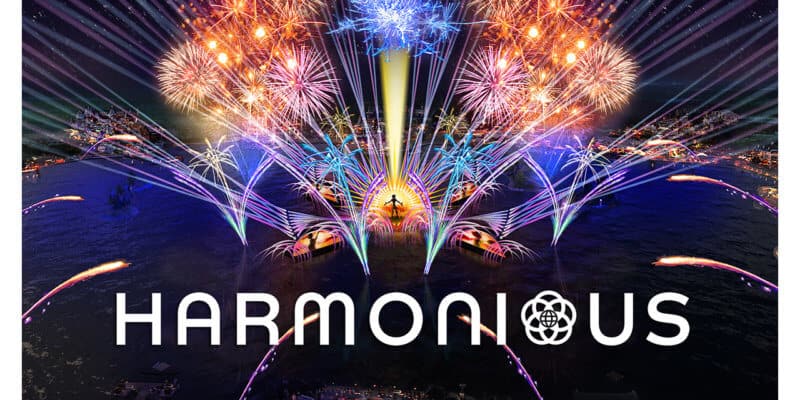 Today, Disney released new concept art for the upcoming nighttime spectacular show at Epcot, “Harmonious”. A never before seen logo is included: check it out!

The graphic included in this logo was unveiled last year, around the opening of Epcot Experience. It appears to represent what is described as, “nature, discovery, world culture and celebration of humanity,” as outlined in Epcot Experience. “Harmonious” is just one example of many new projects that are currently underway at Epcot that follow this theme.

The rest of the concept art features what guests can expect the new show to look like. It has been described as, “the largest nighttime spectacular in Disney history.” “Harmonious” is set to premiere at Epcot later in 2020. It will feature a wide variety of effects, including pyro, synchronized fountains, and lasers.

The show can be enjoyed from any vantage point around the showcase, from Canada pavilion to France pavilion. Based on the concept art, it seems that there will be many large barges throughout the lagoon. These barges will feature graphics that include Disney characters, such as Miguel from Coco, and Moana.

Related, “Everything You Need To Know About Epcot’s New Nighttime Spectacular “Harmonious”

Many Disney fans were sad to bid farewell to Illuminations: Reflections of Earth last Fall. However, the information and graphics that have been given for this upcoming show bode very well for eager fans. It will be the perfect center point for all of the reimagining that Epcot will see in the near future. In the meantime, guests are able to enjoy the temporary nighttime show, “Epcot Forever”.

What are your thoughts on what we know about “Harmonious”? Do you enjoy the new logo? Let us know in the comments!