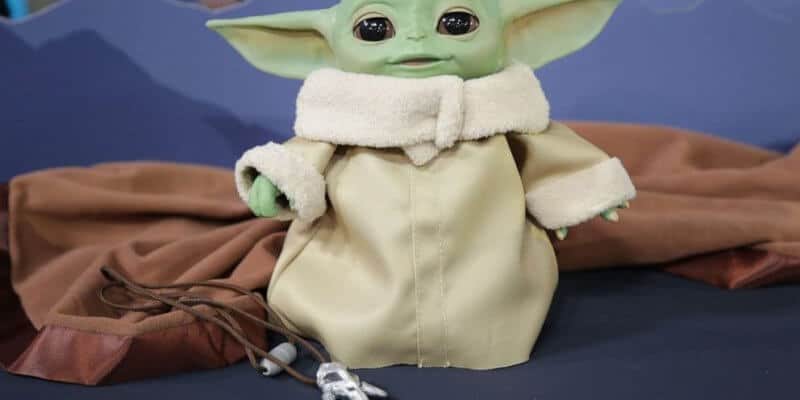 On the morning of Thursday, February 20, the hosts of ABC’s Good Morning America gave viewers a look at the complete line of The Mandalorian merchandise. The collection includes several variations of the Baby Yoda doll as well as clothes, books, and even jewelry.

We’re live in our Verizon green room with a preview of all the new Baby Yoda merchandise available for pre order now ahead of a big reveal this morning on GMA!

But here are the biggest Baby Yoda products that caught out eyes.

From Hasbro’s “Star Wars” collection comes the “The Child Animatronic Edition” toy with sounds and motorized sequences. And now, you can become his protector. Touching the top of his head activates over 25 sound and motion combinations, including happy and excited sounds, giggles, babbles, and more, while the toy’s head moves up and down, ears move back and forth, and eyes open and close. You can pretend to harness the power of the Force as he closes his eyes, raises his arm, and sighs as if exerting a great amount of energy. Lay him down and he will close his eyes and take a “Force nap.”

The Child Talking Plush by Hasbro

Good Morning America described this version of “Baby Yoda” and his accessories as the following:

Nothing in the galaxy is as cute, has taken as many naps, sipped more soup, or learned to control the Force as “The Child.” He’s dressed in the cutest little robe this side of Mos Eisley. Movable arms allow you to pretend the Force is within reach, while a squeeze of the soft plush body activates character sounds. Includes the talking plush toy, a bone broth bowl and a Sorgan frog.

The Child necklace by Rock Love

Good Morning America described this stylish piece of jewelry as the following:

The Child 11” Vinyl Plush by Mattel

This 11-inch plush toy captures the hearts of “Star Wars” fans everywhere. The adorable toy has a soft body, plus a sturdy base filled with beans, perfect for cuddling or display as a collectible. The character wears robes as seen in the show. “Star Wars” fans will love taking on the role of the Mandalorian bounty hunter and caring for the child on their own.

The Child Bounty Series by Hasbro

Back to Hasbro, Good Morning America described this adorable set as the following:

This collection of six Baby Yoda figures features the character in fun poses such as sipping soup and wrapped in a blanket. These 2 1/4-inch collectibles would be ideal to swap with friends, give as gifts or as part of a larger “Star Wars” display.

The Child Poster Book by shopDisney

According to Good Morning America, this book will feature 16 epic double-sided posters featuring “Mando,” “Baby Yoda” and other favorite characters.

The collection also included The Child Pop! by Funko and The Child Plush by shopDisney. Bot of which were already announced and covered by Inside the Magic. You can read our original articles by clicking the links below.

NEW Baby Yoda “The Child” Plush SOLD OUT on shopDisney

Since Disney and Lucasfilm first introduced the world to Baby Yoda, new and old Star Wars fans everywhere have been dying to get their hands on some merchandise. Most importantly, a “Baby Yoda” of their own. However, Disney’s CEO Bob Iger decided to hold off on the release of the toys because he wanted to keep “The Child”/”Baby Yoda” a secret for as long as they could. Iger decided that skipping the Holiday season was the right move. As the lineup begins to hit store shelves, we will soon see if Iger made the right call or not.

Season 2 of Jon Favreau’s groundbreaking show: The Mandalorian will debut on Disney+ in October 2020.