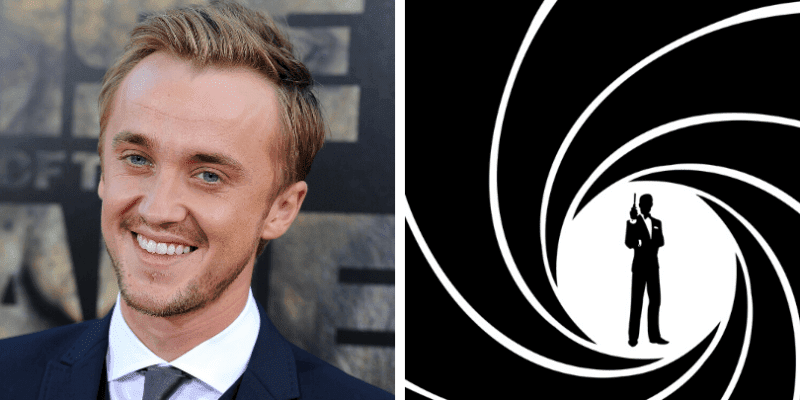 Daniel Craig has made it clear that MGM, Universal, and Eon Productions’ No Time to Die is the last time he will ever play the secret agent, James Bond. Since he made the news, many began speculating who would be chosen as the next 007, and many actors have expressed interest in the role. Now it appears actor Tom Felton has thrown his hat in the ring.

While Felton, 32, became famous worldwide for his role as the infamous Draco Malfoy in Warner Bros.’ Harry Potter franchise, he has always been a fan of James Bond.

He was quoted saying: “James Bond would be the ultimate dream…The first film I had, when I was seven years old was James Bond. That’s all I had on my mind.”

For an actor whose admirations for cinema began with James Bond, growing up to play his favorite action hero would be a very emotional full-circle moment. And that moment would be defined with the words: “Bond. James Bond.”

Fighting off the “Bad Guy” Niche

But one of the challenges Felton will face is the same challenge that has haunted him since the release of Harry Potter and the Deathly Hallows part 2: finding work outside the “bad guy” niche. While Felton has found plenty of acting work since the end of Harry Potter and has taken on roles beyond the “Bad Guy” trope, he has yet to land a role anywhere near as iconic as Draco Malfoy. Unlike his former co-star Emma Watson who went from Hermoine Granger to Belle in Disney’s Beauty and the Beast remake.

Still, Felton says he’s up to the challenge.

“I like playing the goodie,” he said, “but I don’t really look to play a good guy or a bad guy. I like playing people who are different to me – the further away they are from home, the more fun it is to play.”

Very few roles could be as further from home and as iconic for Felton to play as the one and only James Bond.

Regardless of who, the next James Bond will be male.

Speculative rumors may continue to circle around Tom Felton’s competition for the role. But James Bond series producer, Barbara Broccoli, rejects all rumors and claims she has no idea who the next 007 will be. But we can be confident of the fact that 007 will stay male.

“I’m in total denial. I’ve accepted what Daniel has said, but I’m still in denial. It’s too traumatic for me…I believe we should be creating new characters for women – strong female characters. I’m not particularly interested in taking a male character and having a woman play it. I think women are far more interesting than that. So while he might not have to fight off a female for the role, we still think Tom might have some fierce competition for the next person to be able to say the famous words: “Bond, James Bond”.”

What do you think of Tom Felton playing James Bond? Who do you want to see play 007 next? Let us know in the comments!