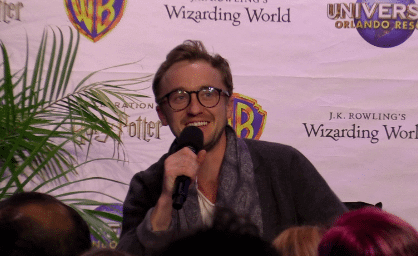 We had a chance to share a room with Tom Felton (Draco Malfoy), Jason Isaacs (Lucius Malfoy), Warwick Davis (Professor Filius Flitwick), and Matthew Lewis (Neville Longbottom) for a spell at Universal Orlando’s A Celebration of Harry Potter. They shared some amusing stories and personal lessons that they learned as a result of being cast in the Harry Potter films. Among them are Tom Felton’s tale of being bullied for playing Draco Malfoy, Matthew Lewis’ confusion over being touted as a sex symbol online, Warwick Davis’ passion for Star Wars, and Jason Isaacs’ opinion on a Malfoy response to Donald Trump’s election. It was an event full of laughs (and a few uncomfortable moments as well) that helped us see just how down-to-earth these celebrities really are.

Comments Off on VIDEO: Tom Felton talks about being bullied for playing Draco Malfoy in Harry Potter movies