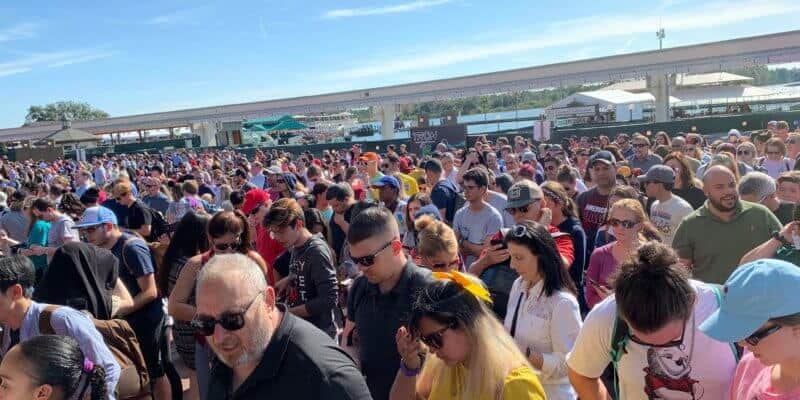 Facebook user. J. Zawislak reported to Inside the Magic today that a large crowd of Guests waited outside the turnstiles to Magic Kingdom Park at Walt Disney World Resort on January 2nd, 2020. Around lunchtime, it wasn’t clear that technical difficulties were barring both MagicBands and Park Tickets from being scanned and processed. After the “Plaids” with iPads from Guest Services attempted to fix the issue, the crowds were let in without scanning, with some elated to be gifted the day at the Park! The crowd was let into the park around 12:18pm, much to their surprise, and by 1pm, the touchpoints were back up and running per usual.

The backlog of Guests waiting to be scanned at Magic Kingdom began backing up along the Monorail ramps as well as the Ferry docks and bus security checkpoints. The My Disney Experience system was at fault for the full stop of the guest entries, and those guests were held at the entrance for some time, reaching out to fellow guests back at the Walt Disney World Resort hotels as well as friends and family back in their home states.

As more and more guests arrived to get into Magic Kingdom, safety was becoming a concern. Where would those offloading from the Monorail stand? Until an official decision was made by higher-ups, the crowd had to wait. During periods of excessive crowds, such as morning rope drop or perhaps New Year’s Eve, fingerprint scanning is often bypassed, yet tickets have always been scanned. Today, Guests wearing a MagicBand or having a ticket in hand were simply waved in by Cast Members on duty.

When you’re ready to plan your exciting trip to Walt Disney World, or even Disneyland, wave your Magicband at Academy Travel. They’ve got just the ticket to send you on to your destination. To get a free no-obligation quote, call Academy Travel at 609-978-0740. Academy Travel is an Authorized Disney Vacation Planner and has been designated as a Diamond EarMarked Travel Agency specializing in Walt Disney World, Disneyland Resort, Disney Cruise Line, Adventures by Disney Vacations and Aulani, a Disney Resort & Spa.