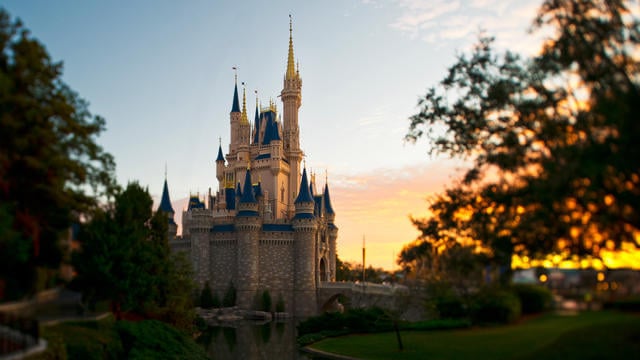 Plenty of Walt Disney World guests are ready to celebrate New Year’s Eve at the Most Magical Place on Earth and are finding a bit of frustration instead of fireworks. Those that did not plan to arrive early to Magic Kingdom are facing the first phase closures at the Fantasy-themed Park. Those in close proximity on property will be able to log onto the My Disney Experience app to this popup message, telling guests that Magic Kingdom is not accepting new Guests at this time due to a Magic Kingdom Phase Closure. Guests are welcome to venture to the three other parks or perhaps Disney Springs for alternative entertainment. 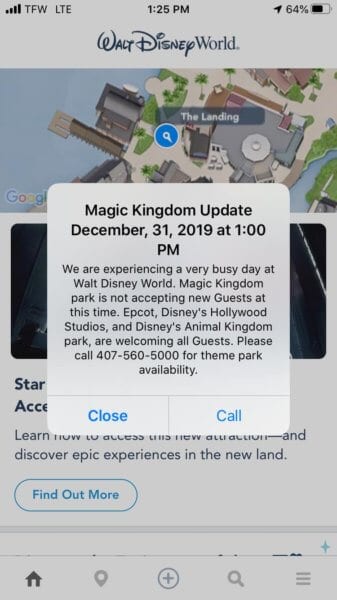 Twitter guest @the4msinnv sent a query to @WDWGuestService, who took over much of the duties from @wdwtoday, about the capacity of the Parks. She was immediately told that “Magic Kingdom is not admitting new Guests at the time.” If guests call the above number, a pre-recorded message is available that says, “Magic Kingdom park is not admitting new guests at this time. please check back periodically for updates.” Inside the Magic confirmed this at 2:18pm.

Hi! We’re experiencing a busy day at the Walt Disney World Resort. We invite you to visit Animal Kingdom Theme Park, Epcot and Hollywood Studios, while Magic Kingdom Park is not admitting new Guests at this time. You can also check availability at 407-560-5000. Thank you! -Emma

If you missed it, the car line to the Magic Kingdom tollbooths snaked down roads and was visible from the chopper of News 6 WKMG Orlando. The video is below:

Twitter user @livinglocurto reached out while in this exact car line for help. There didn’t appear to be Cast Members helping throughout the long line and she was frustrated with her 2pm arrival.

It’s chaos at the Magic Kingdom parking gate. Park just closed due to crowds. Stuck in the line. Nobody out here directing people or giving info. Please share info if other parks are open. Thanks! @WaltDisneyWorld @WDWToday #disneyclosed #disneyworld #magickingdom pic.twitter.com/sLKodq8kyN

Although this is the first time during the Holiday season of 2019 that crowds have lead to a phased closure,  New Year’s Eve has historically been a large draw to Magic Kingdom Park. Magic Kingdom’s New Year’s Eve Party on December 31st, 2006 was outrageously crowded, spouting forth a Cast Member meme that is still displayed to this day.

When crowds die down after this magical night, be sure to contact our trusted travel partner, Academy Travel. They’ll be sure to make fireworks spark over your trip. To get a free no-obligation quote, call Academy Travel at 609-978-0740. Academy Travel is an Authorized Disney Vacation Planner and has been designated as a Diamond EarMarked Travel Agency specializing in Walt Disney World, Disneyland Resort, Disney Cruise Line, Adventures by Disney Vacations and Aulani, a Disney Resort & Spa.