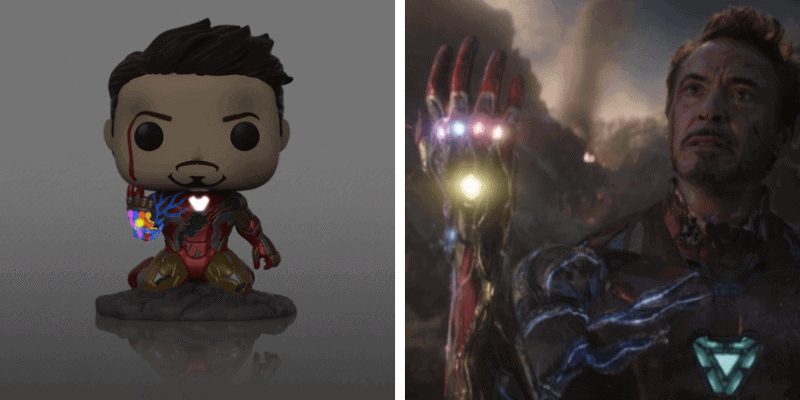 Tony Stark’s last stand and greatest moment in the Marvel Cinematic Universe will be immortalized as a really cool vinyl figure by Funko POP! And it Glows in the Dark!

We see a battle-worn Tony Stark, holes torn in his suit and blood streaming down his brow. He’s on his knees, and he has the stones on his right hand. His fingers are poised, ready to snap. He has a hard, determined stare on his face.

While this figure is incredible enough as it is, its glow-in-the-dark features take it to a-whole-nother level. Turn out the lights, and you will see Tony’s arc reactor lights up, as well as the stones with veins of pure energy coursing up his arm.

But if you want to get your hands on one, you have to act fast!

This unique Iron Man Funko POP is a “previews exclusive,” which, for all intents and purposes, means that there is a very limited quantity available. The “I am Iron Man” figurine is available for Pre-Order RIGHT NOW with orders scheduled to be delivered in April 2020.

A Great Addition, The Greatest Sacrifice

This Funko POP! is an excellent addition to anyone’s vinyl collection, and it immortalizes one of the greatest and most heartbreaking moments of the Marvel Cinematic Universe. Tony Stark, the genius, billionaire, playboy, philanthropist–the man that started it all–made the ultimate sacrifice to save the universe. He eliminated Thanos and his army, with a single snap. But the power of the infinity stones was too much for him, and it cost him his life.

What do you think of this deluxe Iron Man Funko POP figurine? Is this one you have to add to your collection? Let us know in the comments!

Comments Off on You can now pre-order the Avengers: Endgame “I am Iron Man” Funko POP!