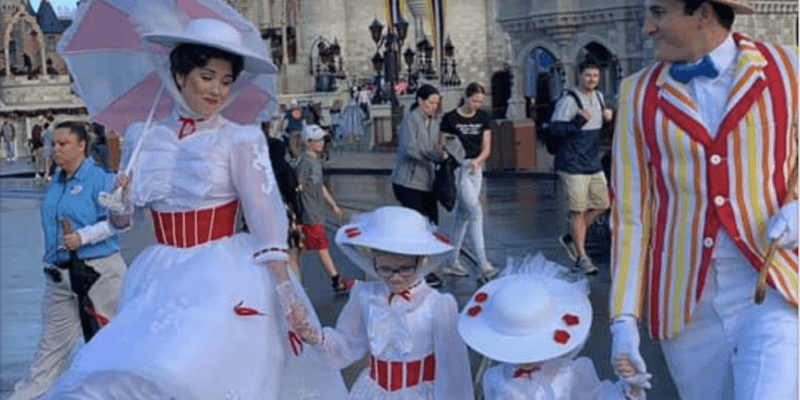 You don’t need a spoonful of sugar to digest this sincerely cute video of these mini Mary Poppins. These two little girls, Demi and Tory, are sisters who were visiting Walt Disney World Resort’s Magic Kingdom Park on December 23rd. Circling the Central Hub, the girls happened upon Bert and Mary skipping towards Main Street U.S.A. Bert and Mary took a break from their cotton-candy-colored duties to take the girls on a tour.

Demi and Tory’s mother, Caroline Ross shared that this special video with Mary Poppins and Bert was taken during the last day of the family’s week-long holiday trip. She captured the practically perfect parade on her phone. You can even hear the girls singing along with Mary and Bert that “It’s a Jolly Holiday with Mary…”

Who knew a sweet moment for Demi and Tory would become such a hit with so many people! I mean we are pretty bias but we…

Here at Inside the Magic, we are no strangers to the wonderful costumes and creations made by fans, such as this Cinderella gown made of discarded Disney Shopping Bags. When the facebook crowd asked how Caroline made these rum-punch detailed dresses, she answered on a post, “A few people thinking their mom has mad seamstress skills…. yeah, ShopDisney is the one with those mad skills, I just have awesome credit card purchasing power!”

The power our favorite characters often have on us is pure magic, as seen in this short video when a tiny girl meets her idol; the Dark Side’s own Kylo Ren. Her reaction is priceless as her magic is real and tangible. The same can be said for Loki’s admirer as he totes her around Disney’s California adventure! Villains don’t have all the power, as the classic fab five still have sway in this town! Daisy meets her mini with tail feathers intact in this cute video.

If your family member could meet a character and dress as their twin, who would it be? Leave us a comment below!