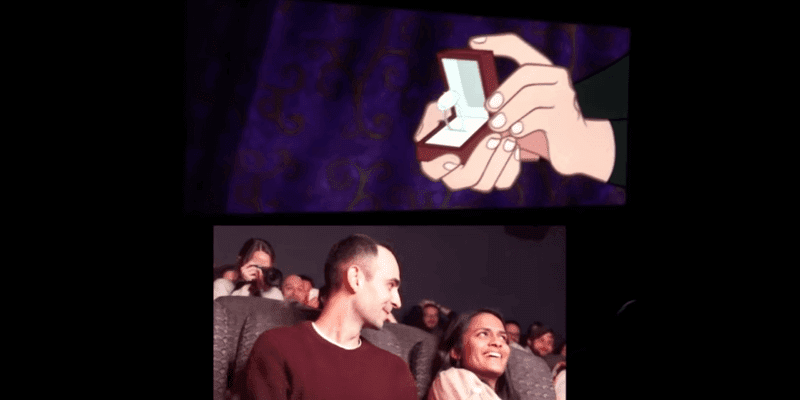 A few weeks ago, a man named Lee Loechler pulled off one of the most magical Disney-themed proposals to ever hit the internet. Somehow, he hijacked a copy of Walt Disney’s Sleeping Beauty and reanimated the climax scene, so it appeared he was Prince Phillip, and she was Princess Aurora. He had the animated version of himself “toss” him the ring and look on as he dropped to one knee and gave a speech that ended with the question: “Will you live happily ever after with me?”

If you haven’t yet, watch the full proposal video below:

This over-the-top proposal received international attention and left a lot of people asking, “How did he do that?!” After weeks of leaving people in awe, Loechler finally explained how he was able to pull off his proposal.

Plenty of time to prepare

To get his proposal just right, Loechler spent six months crafting and planning. But his proposal was years in the making when he and his new fiancée, Sthuthi David, started dating in college.

He said, “I’ve always known, even in high school, that this was her favorite movie and held a special place in her heart.” And he always knew he wanted to incorporate Sleeping Beauty into his proposal.

Loechler and David were also in a long-distance relationship. He lived in California while she lived in Virginia. While distance would cause most couples stress, Loechler was given the blessing to plan his proposal and recruit help more openly.

The right career and the right connections

It turns out, Loechler works in California as a professional filmmaker. Possessing all the skills needed to add scenes into the film properly, he reached out to Australian artist Kayla Coombs over Instagram, who specializes in the Disney style. She was responsible for creating the new animation. After using his editing skills to add Coombs’ scenes, he began to make plans to show his girlfriend the film at home. But then he got another idea.

Loechler teamed up with the Coolidge Corner Theater to set aside a 45-seat theater room for the event, and he got everybody in on it. The projectionist was coerced into switching to the new scene, a photographer was on-hand, and he recruited “extras” on Reddit to take up seats and help hide family members. When the newly-engaged couple exited the theater, the marquee was changed to say, “Congratulations, Sthuthi and Lee.”

“We’re always a little hesitant to book our theaters for something like this,” said theater program manager and director of special events, Mark Anastasio. “I kind of green-lit it just to see if he could pull it off.”

Related: The Gentleman’s Guide to Proposing at Walt Disney World

What do you think of this epic proposal? Do you think you could pull it off or top it? Let us know in the comments!