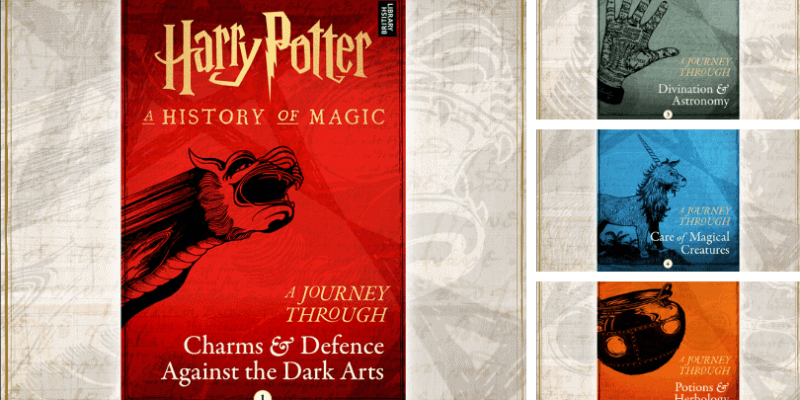 In spring 2019, it was announced that Harry Potter fans everywhere would soon have more stories to read. Taken from the audiobook, Harry Potter: A History of Magic, J.K. Rowling‘s “The Journey Through…” collection features four “bite-sized” ebooks that are each themed after a different course taught at Hogwarts.

The four books are:

A Journey Through Charms & Defense Against the Dark Arts

“Warding off evil is also something that has concerned people throughout history. From werewolves to all manner of snakes in the wizarding world, you’d learn how to face a number of strange and frightening forces in Defence Against the Dark Arts classes.”

A Journey Through Potions & Herbology

“Potions have been made for thousands of years – associated with bubbling pots and mysterious ingredients. They have been brewed to make medicines, drugs and poisons. Plants have also been important components of medicines as much as myth-making and magic. A source of danger as well as a means of overcoming obstacles, Herbology was a subject which had a major bearing on Harry’s key decisions and mistakes in the wizarding world.”

A Journey Through Divination & Astronomy

“From the use of bones and shells thousands of years ago to peering into teacups in the parlors of Victorian England, for millennia, people have strived to see what fate and fortune holds.”“Trying to read our destinies, the study of the night sky has fascinated people for centuries, from the star atlases of ancient China to the celestial globes of 17th-century Venice.”

A Journey Through Care of Magical Creatures

“In the past, naturalists and explorers traveled the globe to encounter weird and wonderful creatures that enhanced our knowledge of the world and pushed forward the development of science.”

“Nevertheless, it seems part of human nature to want to believe in the unbelievable: from the bestiaries and cabinets of curiosities of the medieval period onwards. We think that truth and myth are easily distinguished today, but magical creatures and the stories around them continue to fascinate us — and they are as central to the Harry Potter stories as Harry, Hermione and Ron.”

You can see the original tweet announcement for the series here:

Ever wondered where magic really came from? Introducing the Harry Potter: A Journey Through… non-fiction eBook shorts, adapted from the audiobook Harry Potter: A History of Magic and inspired by the @britishlibrary exhibition of the same name. https://t.co/bsp3X6QTMy pic.twitter.com/FDXIxUKlih

All four stories are now available on shop.wizardingworld.com for $2.99 USD each.

Are you excited for more stories from the Wizarding World of Harry Potter? Have you had a chance to already read these stories? Which Hogwarts class interests you the most? Let us know in the comments!