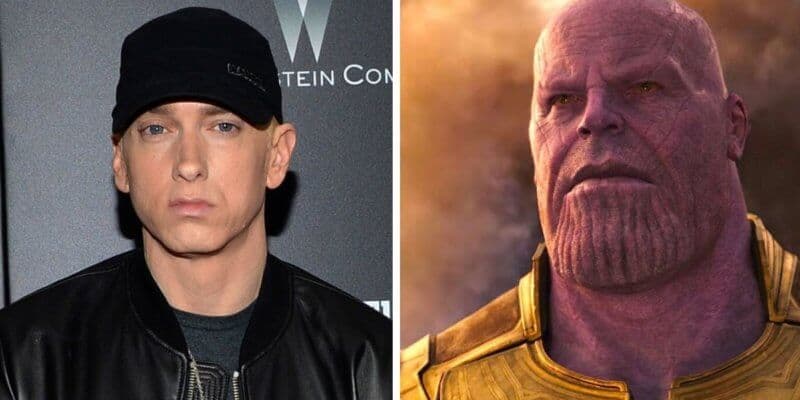 As a huge fan of both Eminem and Marvel, I absolutely love this mash up!

The new album titled Music to Be Murdered By, features a special shoutout to Marvel’s biggest villain — Thanos.

The real Slim Shady decided to do what he does best and spit some “hot rhymes”, especially on track #2 titled “Unaccommodating”.

The song, which also features breakout rapper and actress Young M.A, showcases Eminem’s humor while he references the MCU villain, Thanos, and his iconic defeat in Avengers: Endgame.

Starting at 1:17 in “Unaccommodating” on the new album Music To Be Murdered By, the lyrics go:

“Game over, Thanos / All you H, O’s on my petty sh*t / But I don’t paint toes / Get the plunger, because Marshall and M.A go / plum crazy, call us liquid plumber / cause even Dre know…”

Related: Baby Thanos Concept Art for Avengers 4 is what Nightmares are Made of

You can listen to the full song “Unaccommodating” in the video clip below.

Related: Marvel may use Thanos’ snap to introduce X-Men in the MCU

Eminem recently lent his talent to the soundtrack for the film, Venom, which actually went on to crack the Billboard Top 50 in the United States, Canada and Australia.

Eminem’s new album, Music To Be Murdered By, is now streaming on iTunes and other platforms.

Related: Teacher offers Thanos-like threat to fail half his class if he hears “Avengers: Endgame” spoilers

What do you think of Eminem’s new song that refers to Thanos? Let us know in the comments.