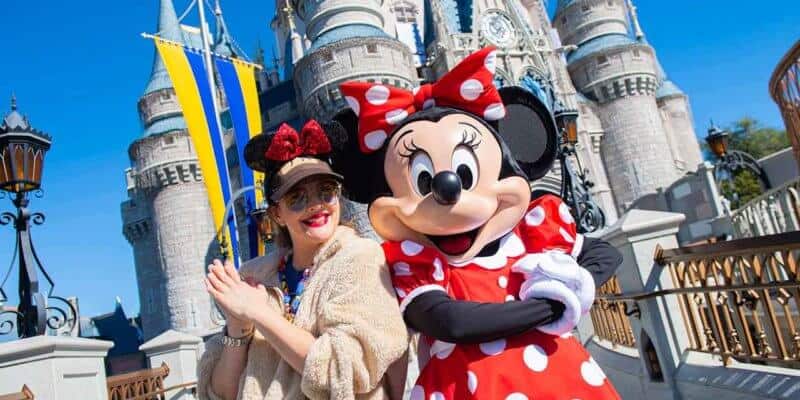 Actress Drew Barrymore just recently visited The Most Magical Place on Earth with her family and had the time of their lives.

While visiting Walt Disney World Resort in Florida, she went to visit Magic Kingdom and stopped to pose for a photo with Minnie Mouse!

Barrymore and her family are huge Disney fans. Back in 2017, the actress was appearing on Late Night with Seth Meyers where she told the stories of every mom’s nightmare — a child meltdown at the theme parks. She took her daughters, Frankie, two-years-old, and Olive, four-years-old, to visit Disney when her daughter Olive had a meltdown.

“If you’ve ever taken your kids to Disneyland or Disney World, it all ends at some point in, like… mayhem,” Barrymore said. But regardless of the meltdowns, overall, Barrymore said she loves going to Disney with her children, even saying that it was “the best experience ever.”

Drew Barrymore is an American actress, producer, director, author, model, and entrepreneur. She has starred in several films including Charlie’s Angels, 50 First Dates, Blended, Never Been Kissed, and The Wedding Singer.

If you want to visit Walt Disney World on your next family vacation but aren’t sure where to being planning, then be sure to reach out to our trusty friends, the Authorized Disney Vacation Planners, who will be there with you every step of the way of planning your next magical vacation.

Have you ever seen a celebrity while visiting Walt Disney World or Disneyland? Let us know in the comments.