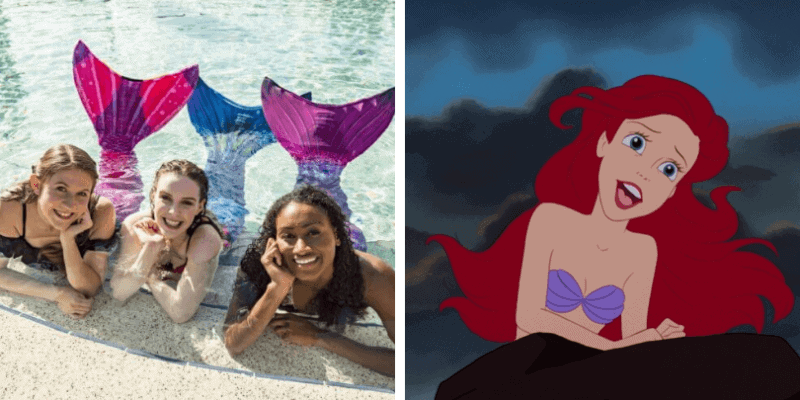 Yes, Walt Disney World has a mermaid school where you can spend the morning living your best life as a citizen of Atlantica. This year’s classes commence on March 1 and reservations are now open.

If you want to know what it’s like to be part of their world, here’s what you need to know!

Where on Disney Property is the Mermaid School?

The lessons involve a series of fun activities that teach you how to swim like a real mermaid in the resort pools. Afterward, guests will be given special medallions for their time “Under the Sea.”

How long and how much are the mermaid lessons?

The experience now costs $55 per person (plus tax) and reservations can be made by calling 407-WDW-PLAY (939-7529). Each lesson is one hour long and includes a “transformation” where each human is fitted with their own “tail.” Goggles are also offered but are optional.

Are there age restrictions for the mermaid lessons?

This experience is open to all guests ages 4 and older. So, the entire family of mermaids and mermen can join on the fun.

Okay, but what do the mermaid lessons entail?

Well, one writer for Marie Claire, Laura Studaris, tried it for herself. Growing up, The Little Mermaid was her favorite movie, and now Disney gave her the chance to live out her dream with a few other little princesses who wouldn’t have to wait as long.

“In my session,” she explained, “I was joined by five wide-eyed girls under the age of 7, and a mother who admitted she was relieved to be swimming with another adult. I encouraged her to own her inner Daryl Hannah, which cracked us both up.”

Studaris explained that the course was run “by Mermaid Academy founder Joe O’Rourke, whose teaching style is cross between a stern drill sergeant [and a] goofy dad, and his assistant Danielle, who is so invested in mermaid culture that she owned two tails and a keychain before getting the gig.” After proving their ability to swim, they were fitted for their tails.

She described putting on her tail, “Like slipping into Spanx of the sea, slithering into my hot pink tail took a bit of negotiation (read: undignified wiggling).” She recalled the swimming with the tail to be awkward at first, but as she listened to her instructors, she improved.

While the little kids picked it up faster than she did, Studaris was able to swim full laps of the pool completely underwater. They were also tasked to practice the very important skill of scooping “treasure” off the bottom of the pool-er-“ocean.”

She admitted to being skeptical at first. But in the end, she discovered a very transforming experience.

I was promised I would feel “transformed” after pulling on the tail, a statement that on dry land felt like an overreach. But even though I was wearing the world’s ugliest bathing suit (purchased already faded and stretched from a second-hand shop), I realized I did feel different. Sitting on the pool steps, I subconsciously scooped up water with my tail. Posing with it made me feel sleeker. After some trial and error, swimming with it made me feel faster…If it were up to me I would have made a break from the pool and headed straight into the open sea, an escape plan that would have only worked if I was also magically gifted with stamina. But, with the area opening to the rest of the resort guests, we had to give back our tails at 9 a.m.

Again, you can book this magical experience for you and your family by calling 407-WDW-PLAY (939-7529), or work with an Authorized Disney Vacation Planner at Academy Travel.