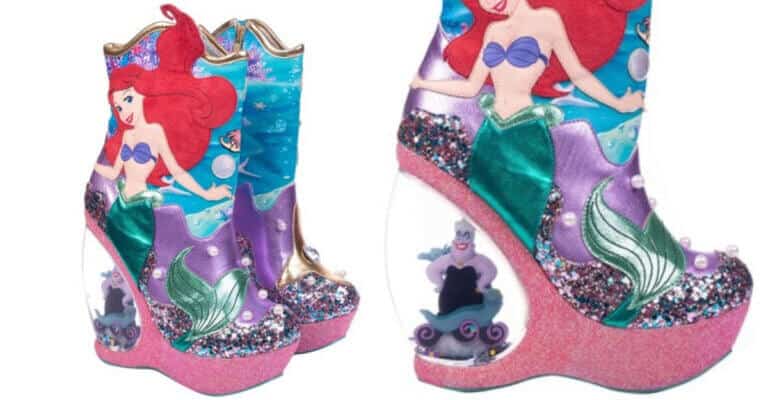 No, these photos aren’t photoshopped. These Disney Princess boots actually have a Little Mermaid water globe in each heel. And while they look totally impossible to walk in without breaking the water globe, we’ll probably take our chances — because these boots are absolutely adorable and perfect for every Disney fan!

Available on Fun.com from the well-known Disney style brand Irregular Choice, these boots are an absolute dream come true. The Irregular Choice Disney Princess Little Mermaid ‘Just Me & The Sea’ Wedge Boots are themed after our favorite mermaid princess, Ariel, and the iconic sea witch, Ursula. And contrary to what you might think, they are actually sold in adult sizes! These boots would make for the perfect night out or DisneyBound inspired by your favorite Disney Princess. They might not be everyone’s cup of tea, but they sure are eye-catching!

There’s one catch though: they’re over $300 –well, $390 plus tax, to be exact. We know what you’re thinking: why would any Disney fan (especially one who’s on a budget since they’re planning their next Disney vacation) spend $400 on a pair of boots?

If you want to know more information about these Disney Princess boots, below you can read the official description as it’s written on Fun.com:

The Shoe with Everything

Disney’s The Little Mermaid has everything! It has an adventurous princess, who yearns to discover new worlds. It has an evil sea witch, who’s bent on usurping the throne of the king. It has romance, betrayal, and epic songs that spark the imagination and it even has a happily ever after ending! If only there was a way for a shoe to capture all of the magic of the movie…

Wait a second! Irregular Choice made these “Just Me & the Sea” Wedge Boots and they’re 100% magnificent!

Fun Details
These delightfully delicious shoes come from Irregular Choice’s line of Disney Princess footwear. They’re made out of polyurethane materials and have tons of brilliant details that bring together some of the best moments of The Little Mermaid. Ariel and Flounder are appliqued onto the sides of the shoes and shimmering sequins cover the front. A small encased water globe decorates each 6-inch heel. One features a small figurine of Ariel, while the other features the devilish sea witch, Ursula. Slip them on and it’s like bringing the entire movie with you anywhere you go! And, like all Irregular Choice shoes, they look just as great on your shelf as they do on your feet!

You can shop the Irregular Choice Disney Princess Little Mermaid ‘Just Me & The Sea’ Wedge Boots on Fun.com here.

What do you think of these Disney Princess boots? Would you wear them? Let us know in the comments!

Comments Off on These Disney Princess Boots Have a “Little Mermaid” Water Globe in the Heel!