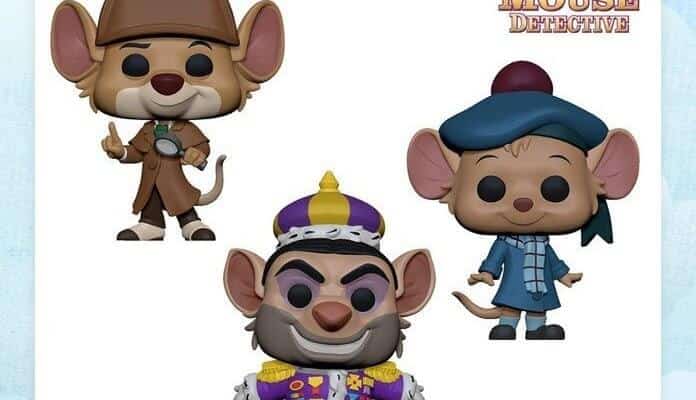 Over the years I’ve tried to stick to just purchasing Funko Pops that are based on Disney’s theme parks if only to save my Disney collection from growing tenfold. I may need to make an exception with these new Pops that are focused on some of the lesser-known Disney properties of the 80s. Let’s take a look at what has been announced so far:

Released in 1986, The Great Mouse Detective focuses on Basil, a little rodent version of Sherlock Holmes who is deep into an investigation on who has kidnapped a toy-maker. Any kids in the 80s (or early 90s) in my case would know this is an under-rated Disney classic that includes the great voice talents of Vincent Price, perhaps best known for his Disney Parks work on Phantom Manor in Disneyland Paris!

The Funko Pops being released include Basil, Olivia, and Ratigan and you can get another look at them below:

These figures look awesome and despite being petrified of Ratigan as a kid, I think he is my favorite of the three here! Pre-order The Great Mouse Detective figurines here.

Now onto an even smaller Disney franchise…

Adventures of the Gummi Bears

Disney’s Adventures Of The Gummi Bears is one of those shows where a lot of people think that it wasn’t even a Disney production but it was and the show ran from 1985-1991.  If this show missed you on its first run, you can watch the entire series now on Disney+. The Pop Funkos for Adventures of the Gummi Bears also look great and include Tummi, Zummi, Gruffi, Sunni, and Cubbi. Take a look at the collection below:

Both sets of these 80s classics will release in June of this year but you can begin pre-ordering now. I still have my Baby Yoda Funko Pop on order for next month!

Are you a fan of these 80s Pop Funkos? Let us know in the comments below!

Comments Off on New Disney Funko Pops are a Must for Any Child of the 80s!