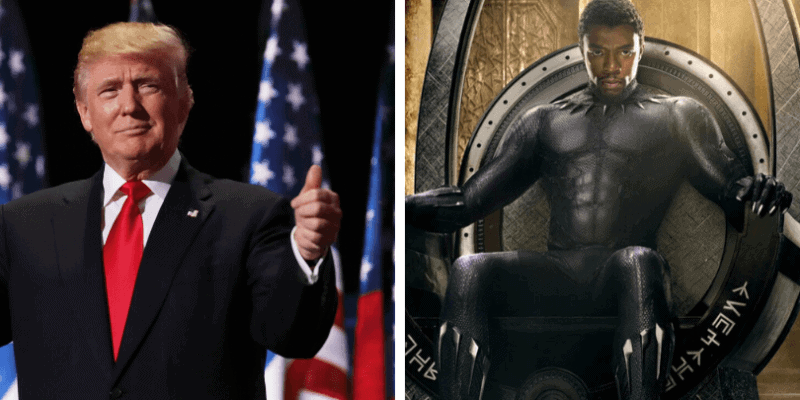 No, we’re not joking. This is a reminder that everyone should be able to laugh at their government.

It turns out the United States had a free trade deal with Wakanda. Marvel’s epic, yet unfortunately fictitious, East African Kingdom was listed as a U.S. free trade partner on an Agricultural Tariff Tracker maintained by the United States Department of Agriculture (USDA). The nation of the Black Panther was removed from the website signaling the deal is now terminated.

The news was first discovered by Francis Tseng of the Jain Family Institute. He further discovered that after selecting Wakanda, there were drop-down menus that listed tariffs on every product, including, comically enough, “wild asses.”

Tseng posted his findings on Twitter, and you can see the tweets here:

But unfortunately, you no longer have a chance to learn how much it would cost to import live Wakandan asses to the U.S. The terms of the trade deal were removed from the USDA’s website. Supposedly, Wakanda was only listed to test the website’s new system.

“Over the past few weeks, the Foreign Agricultural Service staff who maintain the Tariff Tracker have been using test files to ensure that the system is running properly. The Wakanda information should have been removed after testing and has now been taken down.”

Still, it’s nice to know that for a brief moment, President Trump and King T’Challa formed some kind of free-trade partnership. NBC reported that any American looking to import cows or Chinese water chestnuts from Wakanda could do so tariff-free. Yellow potatoes, on the other hand, were taxed at a base rate of “0.5 cent/kg.” Still, the USDA also stated on their website, “information displayed is not official and should only be used as a general reference. Each importing countries customs office maintains the right for final determination of tariff treatment.” There is no word yet if or when renegotiations will commence.

The Kingdom of Wakanda was first introduced to the American people in July 1966 by notable writers Stan Lee and Jack Kirkby. It is a formerly-isolationist monarchy located somewhere in Eastern, Sub-Saharan Africa. King T’Challa succeeded his father King T’Chaka after the senior royal was killed in a terrorist attack on the U.N. in 2016.

Marvel’s Black Panther 2 is scheduled to arrive in theaters by Spring 2022.

What do you think? Are you surprised that Wakanda showed up on the USDA’s site? Let us know in the comments!