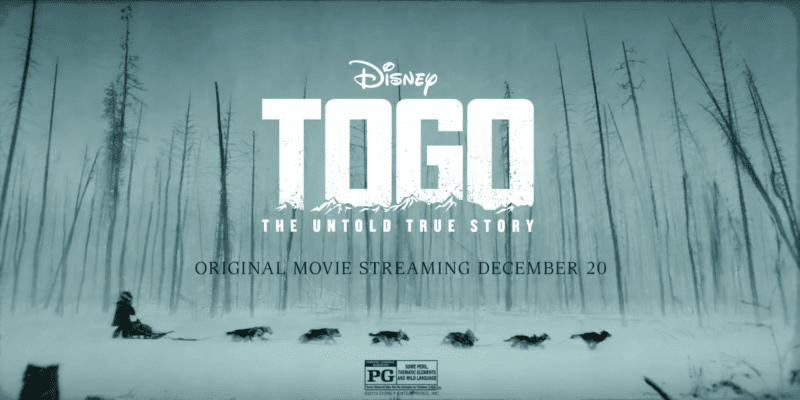 It’s a movie about historic events, but #SpoilerAlert to those who will still get upset if I don’t say anything.

I just finished watching TOGO on Disney+, after letting the rush of Star Wars: The Rise of Skywalker pass over first. It is a masterpiece worthy of any theatrical release, and I have to say, I am furious with Steven Spielberg.

With Balto, Spielberg’s Amblin Entertainment did to The 1925 Serum Relay what Disney did to the story of Pocahontas and John Smith: Used animation to feed kids a very VERY incorrect telling of a moment in history.

But in their defense, the Lower 48–aka “The Continental United States”–only got the Balto story. Director Ericson Core and lead actor Willem Defoe set the record straight in a beautiful way.

And so we learn:

The Hero’s Journey in its Purest Form

But TOGO is more than just a historical correction. In fact, the story got better with each disenchantment. And what we have is a real story with all the classic characters that fall into place because they’re true.

We have the quiet, dutiful hero (Seppala) who wrestles with denial of his dog’s mortality with a “stay one step ahead of the devil” kind of way. Then you have the underdog (Togo) whose unruly character shows him to be the perfect leader. Next, we have the hero’s wife (Constance Seppala, played by Julianne Nicholson), who, like all the best women, shows more wisdom and foresight than any man. Oh, and let’s not forget the utterly incompetent politician (Mayor George Maynard, played by Christopher Heyerdahl) and the Inuit who are on a far more profound connection with the animals (Amituk and Atiqtalik, played by Michael Greyeyes and Nive Nielsen).

This beautiful and simple structure of the hero’s journey is even evident in one of the most chilling moments of the film where Seppala cheers his team on by reciting his own Alaskan version of the St. Chrispin’s Day Speech from Shakespeare’s Henry V. This is probably one of if not my favorite moment in the movie. A proud Defoe moment with fantastic cinematography. It is a monologue that should be recorded as one of his best.

Act 1 of the film takes no time at all. In the first five minutes, everything from the size of the storm to the connection Seppala has with Togo is known. Act 2, we flash back and forth between the Seppala and Togo’s journey across the Interior, and the story of how Seppala hated Togo at first. Despite his wife’s love for the unruly runt, Seppala had no patience for him. After trying to give him away twice, Seppala finally conceded and discovered Togo to be the best lead dog he’s ever had. But, as we move into Act 3, we see an old man begin to face reality about his old dog: there’s a good chance he’s going to run the 12-year-old husky to death. All ends well, though, and we see Togo enjoy his new job as a dad and the genesis of a new breed of Huskies called Seppala Siberians.

Biggest Praise Goes to the Actors and the Director

Defoe played the Norwegian musher, Leonhard Seppala, with breathtaking brilliance. The method actor learned how to drive the sled for the film, and he worked on-hand with his team of real huskies.

This film also incorporates the best acting dogs I’ve ever seen. All good boys and girls. Especially the pup(s) who played puppy Togo. But the interaction and chemistry between “Togo” and Defoe have set new standards for the film industry. Defoe is also surrounded by an excellent supporting cast led by Julianne Nicholson, who played Seppala’s wife, Constance.

But the highest praise goes to director Ericson Core who worked on location, with real dogs, and with children to tell a heart-gripping story with spectacular vistas, jaw-dropping action, and solemn intimacy.

All in all, this is a powerful heartwarming telling of the untold true story of survival that’s fit for the whole family. It is a tear-jerker but in the best way. If you are looking to get sucked into a story that will remind you to book that trip to Alaska–and love your dogs–this is the movie for you. Also, if I didn’t make it clear already, screw Balto. This story’s better.

Also, spoiler alert: no dogs die. So you can relax and enjoy the movie.

But what did you think? Let us know in the comments!