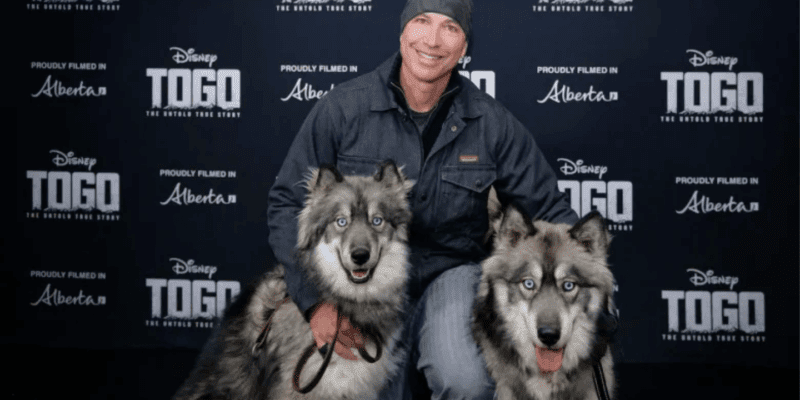 TOGO, Disney’s new epic adventure film about The Great Alaskan Race, was filmed on location in Alberta, Canada. And Director, Ericson Core, loved every minute of it.

“[The Rockies are] stunning, they rival any other mountain range around the world,” Core said at a special early screening of the film in Cochran, Alberta. “Everything was shot here — we didn’t do any studio work. No green screen. It was all in-camera. It’s all an Alberta film, and made here from beginning to end.”

Core has experience as a mountain guide and a deep love of the outdoors. He was the perfect choice to make this movie. “Disney stumbled on it, they developed it, and they reached out to me,” he explained. “[I’m] sort of an outdoorsy person and an animal lover, so they thought it would be the right film for me, and they were absolutely right. I cried and cried when I read the script, [and] I knew I had to make it.”

Despite his background in the mountains, Core was still blown away by the jaw-dropping landscapes he found in the Canadian Rockies. Togo’s journey crosses four Alaskan Mountain Ranges: the Seward Peninsula Mountains, the Nulato Hills, the Kuskokwim Mountains, and the Alaska Range. There is no doubt that the Canadian Rockies will play their roles with an Oscar-winning performance.

The movie was proudly filmed in the Canadian Province of Alberta. Alberta is already home to the internet-famous Lake Louise and Banff National Park of Canada. Now Albertans hope their province will be known for film production that Core himself called “world-class.”

CBC reported that 200 Albertans were a part of the production crew and a special screening took place in the town of Cochran–where the TOGO was partial filmed–as a sign of appreciation.

This is not Disney’s first time filming a movie about sled dogs in Canada. The gimmicky comedy starring Cuba Gooding Jr., Snow Dogs, was also filmed in Alberta, and the epic adventure, Eight Below, starring the late Paul Walker was partially filmed in neighboring British Columbia.

TOGO is an epic adventure film based on the true story about the desperate sled dog run to save the children of Nome, Alaska from the 1925 Diptheria outbreak. The 600-mile run from Nome to Nenana was the inspiration behind today’s Iditarod Sled Dog Race that runs over 1,000 miles from Anchorage to Nome every March. TOGO premiers on Disney+ on December 20.

Are you excited for TOGO? Are you surprised they shot the entire movie on location? Let us know in the comments!