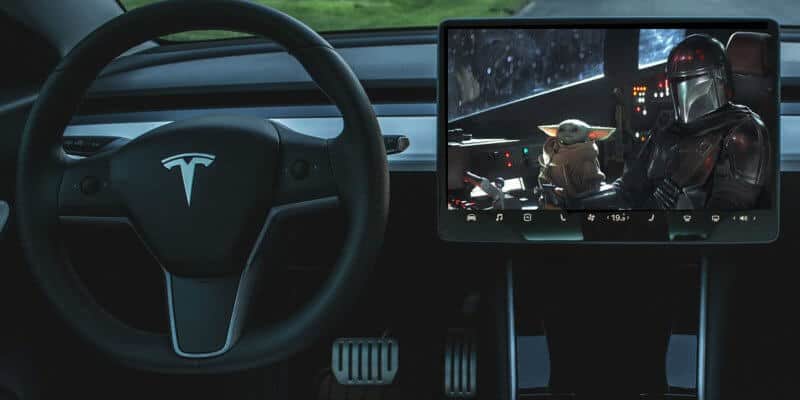 Tesla owners, your car rides are about to get a whole lot more magical. According to Elon Musk, Tesla Theater — the way in which Tesla vehicles give passengers access to streaming their favorite shows and singing “Caraoke” — will soon be getting Disney+. Here’s what we know so far.

Head of Tesla Elon Musk recently replied to a Tweet that asked whether Disney’s new streaming service, Disney+, could be added to Tesla Theater. And in a short but hopeful reply, Musk Tweeted, “Coming soon.” Take a look:

To give you a bit more background information, the Tesla Theater has only been available in Tesla cars for the past few months. It was added in mid-September and gives Tesla vehicles the ability to showcase films and TV shows on their large dash screen. While we’d hate for Disney’s streaming service to distract drivers (Baby Yoda is pretty captivating, don’t you think?), having Disney+ could elevate the already popular Tesla Theater amenity, which currently includes Netflix, Hulu, YouTube, Twitch, and Tesla Tutorials.

Considering the popularity of Disney+, we’re not surprised that fans want to be able to stream their favorite Disney content while on the road in their Tesla vehicles. Disney+ includes (almost) all of the shows and movies a fan could want, from Disney Channel Original Movies and Pixar shorts to our favorite Star Wars and Marvel films and even National Geographic. And who wouldn’t want to binge-watch every episode of The Mandalorian or High School Musical: The Musical: The Series on a Tesla car ride? Sounds like the perfect road trip to us!

As of right now, the only “confirmation” we have that Disney+ will be available for streaming in Tesla Theater is this “Coming soon” Tweet from Musk himself. Considering Musk’s role, we wouldn’t be surprised if this was true. But since neither Disney+ nor Tesla have made the official announcement about whether Disney’s streaming service is coming to Tesla cars, we’re going to wait and see what happens. Either way, we’ll be sure to update you when we know more information on if or when Disney+ comes to Tesla Theater.

What do you think: Do you hope the Disney+ streaming service becomes available in Tesla cars? How would this change your Tesla driving experience? Let us know your thoughts in the comments.