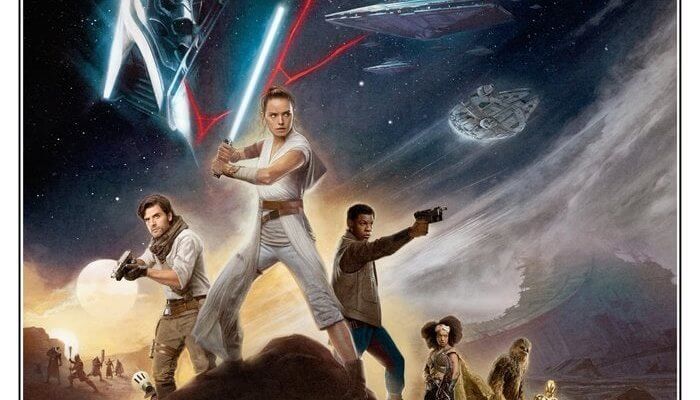 Spoiler Warning: This article touches on themes and characters from Star Wars: The Rise of Skywalker. However, this review has as few spoilers as possible and does not hint at any major plot points in order to preserve the magic for our readers.

The finale of the Skywalker Saga has finally arrived, and we have to admit we thoroughly enjoyed it. Star Wars: The Rise of Skywalker might not have been the exact finale we wanted or even the exact finale that was planned for the series originally. But the film is the finale we never knew we needed, and an ending to a story so beloved by generations.

First, in the most spoiler-free way possible, let’s talk about the characters. Without a doubt, we can tell a difference in the characters from The Force Awakens to The Rise of Skywalker. Looking at Rey in this movie compared to the first two movies, we can really tell how much she has grown and changed (for the better or for worse, you’ll see for yourself). Poe Dameron and Finn are still the characters we know and love, but seeing the two of them and Rey together as a trio of friends really gives this film an energy we never knew we were missing from the first two in the series.

Oh, and by the way: the droids are awesome in this, as always. C-3PO makes us laugh till we cry, BB-8 is our forever love, R2-D2 has some of the most heartfelt moments, and the newest addition, D-O, is the cutest little friend we always wanted.

We’d love to share more about the characters in the movie, how they’ve changed, and what about them truly excited, wowed, or disappointed us, but we can’t say anything else without spoiling major plot points. There’s so much to say about the way Carrie Fisher was included in the film in the most beautiful way, and how director J.J. Abrams made sure she got the sendoff she deserved. So you’ve got to take our word for it when we say that you might be surprised by what you see when it comes to what happens to the characters in this film and the choices they make, but just roll with it.

Visually, the movie is amazing. Seeing it on the big screen feels totally immersive. The action was so compelling, we felt like we were right there in the middle of it. It was so visually stunning that we felt totally captivated the whole time. We were never bored, and the awesome visuals — from the hyped-up action scenes and lightsaber battles to the more emotional somber ones — definitely helped with that.

As we were promised, our questions were answered, and loose ends were tied up. We learned what we hoped we would (an explanation for where Rey comes from and even what her last name is, what would happen to Kylo Ren, whether or not Rey actually turns to the Dark Side), and it was pretty satisfying to finally have answers and for fan theories to be confirmed or denied.

But even though we were satisfied with what we got, we were still in need of more explanations for certain elements of the film. We were left wanting more and almost wish that the movie was half an hour longer just so it could dive deeper into certain characters or certain backstories. We were happy to get answers, but some answers needed more explanation than others. And if Avengers: Endgame could tie up a decade of the Marvel Cinematic Universe in three hours, couldn’t The Rise of Skywalker have been at least three hours to tie up several decades? The movie is around two hours and twenty minutes long, and as fans of the Skywalker Saga, we wouldn’t have minded sitting through another 40 minutes just to learn more about the story we were told.

Finally, it’s easy to tell this is a J.J. Abrams Star Wars film and not a Rian Johnson Star Wars film. Taking on the Star Wars universe is no easy task, and criticism is inevitable. But from a storytelling perspective, this film really hits on an emotional level that The Force Awakens did, and we can thank J.J. Abrams (and Chris Terrio, who he recruited to help him write this final film) for that.

Star Wars: The Rise of Skywalker reminds audiences of something very important: we can choose our own family. And it’s that idea that makes us want to watch this film again as soon as it hits Disney+ (or maybe even again in theaters).

The Rise of Skywalker hits theaters on December 20.