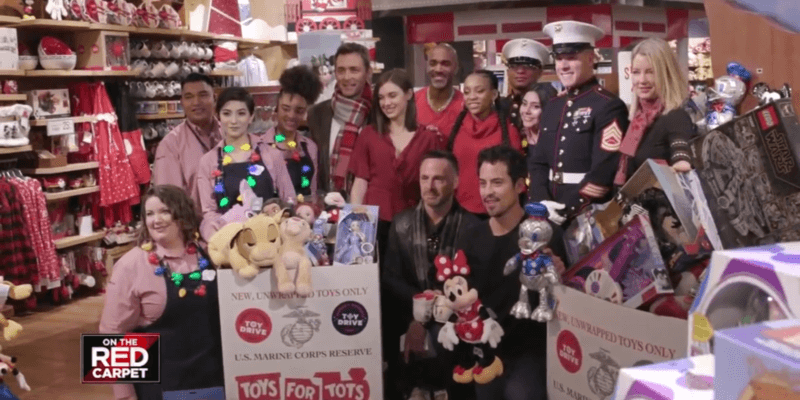 ‘Tis the season for giving and what better way to spread magic and joy than by giving of our time and generosity, especially for those less fortunate.

That’s why the cast of General Hospital decided to find the must-have toys to give away this holiday season. And where else would they be able to find these goodies? None other than the Disney Store!

During the World’s Ultimate Toy Drive, the General Hospital cast joined forces with the Walt Disney Company and the U.S. Marine Corps Reserve’s Toys for Tots to collect this season’s must-have toys and give them to kids that might not wake up to their favorite Disney goodies this Christmas.

Just like us, the General Hospital has some Disney fans among them! They know how special Disney can be, especially to kids.

Katelyn MacMullen, who portrays Willow Tait on the show, is a big Disney fan! She shared: “I know how much Disney means to me personally, so I know how much it means to a lot of kids. To get toys that are from Disney is a really big deal…”. We couldn’t agree more!

They arrived ready for the toy hunt, too! Donnell Turner who plays Curtis Ashford on the long-running show noted, “I came early and did some pre-scouting so I know what the hot items are right now. Let’s just say one of them has to do with Minnie Mouse and a baking set.” Well done, Donnell! Minnie is our favorite Disney girl.

There were many volunteers offering their time and generosity at the event in Los Angeles. Among those volunteering, a Marine Sergeant who has a special place in his heart for this toy drive.

Gunnery Sgt. Darnel Wilson was one of those underprivileged kids growing up. “I remember the Marines coming and giving us toys,” Wilson reminisced. “We’re here for the kids.”

Recently, we shared how Walt Disney World cast members got involved in this amazing toy drive, too! They collected 30,000 toys in just three weeks. That is what this season is all about!

We can only imagine the joy these kids feel as they unwrap not just any toy, but potentially the Disney favorites they’ve been dreaming about and adding to their Christmas lists that maybe their parents were unable to afford. Possibly some Baby Yodas? We sure hope so!

And there’s no doubt this act of kindness will leave a life-long mark in their hearts.

“You’re not just making a difference in a child’s life for a day,” William deVry stated. “You could potentially make a difference…for the rest of [their] life.”