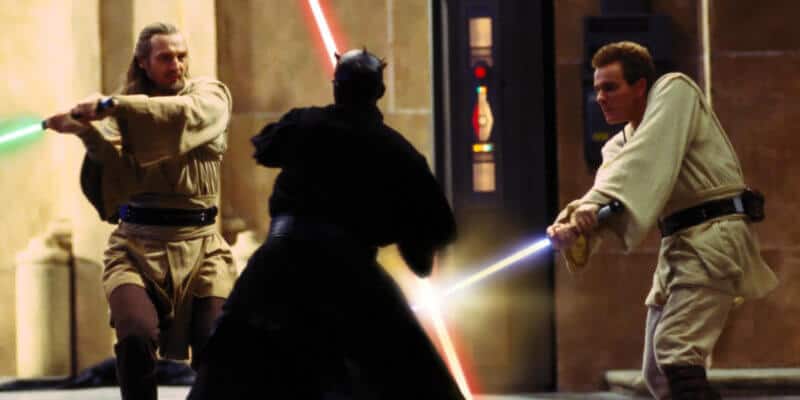 If you remember from The Phantom Menace, Obi-Wan Kenobi and Qui-Gon Jinn battled Darth Maul in what is known as the Duel of the Fates — and it was epic. IGN recently broke down that fight and even spoke with the Kenobi actor himself Ewan McGregor to get his take on it. And from what McGregor recalls, the fight was out of this galaxy awesome.

“[It’s] got to be the best lightsaber fight in the history of Star Wars movies,” McGregor said in a recent interview with IGN. “We rehearsed it so much. Me and Liam [Neeson] and Ray [Park] and then especially the bit after Liam’s down where [it’s] me and Ray. We just had it so well-rehearsed. They were having to over crank the camera to slow it down a bit because we were so fast. I’m not joking. It’s usually the opposite: They undercrank the camera to speed it up a bit. But we were doing it so fast they thought ‘no one’s going to believe it,’ so they slowed it down a little bit.”

The Duel of the Fates was filmed over 20 years ago — but as IGN points out, McGregor was still arguably just as enthusiastic remembering the battle as he must have been while filming it. While the majority of Star Wars fans aren’t in love with the prequel trilogy, it’s safe to agree with McGregor on this one and say that Kenobi and Jinn battling Darth Maul on screen was one of the most intense, epic, and captivating lightsaber fights we’ve seen in a Star Wars film.

During the interview, McGregor continued to share what it was like filming the scene in The Phantom Menace. “We were young and on fire. And it was the first movie and we just got really good at it. We didn’t hurt each other. We just could see what was happening. It was like … It was a blur. It was so good fun to do. And I think it set the bar quite high, you know? And I don’t know that anyone’s ever got better.”

Watch the full interview in IGN’s series  Star Wars: Breaking Down the Duels  featuring Ewan McGregor, Visual Effects Supervisor John Knoll, and Stunt Coordinator and Fight Choreographer Nick Gillard, where they break down the behind-the-scenes of Duel of the Fates below:

Want even more Ewan McGregor? The actor is starring in an all-new Obi-Wan Kenobi series coming soon to Disney+. We don’t yet know the release date for the new series, but we’ll keep you posted once that’s finally announced. And get excited for Star Wars: The Rise of Skywalker coming soon to theatres on December 20.

What do you think is the most epic lightsaber battle in Star Wars history? Do you still remember Duel of the Fates from  Star Wars: The Phantom Menace, or do you have another battle in mind? Let us know in the comments!