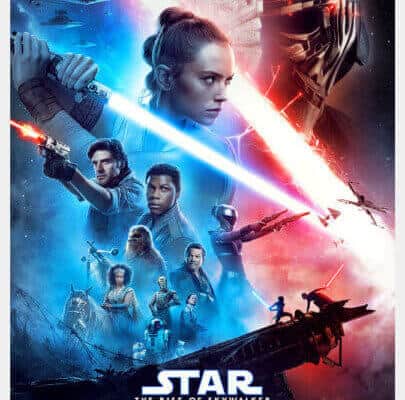 Today, December 18, 2019, around 10,000 troops currently deployed to the middle east will get the chance to see Star Wars: The Rise of Skywalker before everybody else.

In the statement, AAFES Director and CEO Tom Shull said:

“Since 2012, the Exchange has forged a partnership with The Walt Disney Studios to bring first-run movies to our Nation’s heroes. Bringing a blockbuster movie like ‘Star Wars: The Rise of Skywalker’ to deployed troops during the holidays is a big morale boost. These service members are away from family and friends during this special time of year—and seeing a big release at the same time it’s being shown back home strengthens their connection with family and friends and eases the tensions of deployment.”

“It’s a privilege to do something special for these brave men and women. This is our way of thanking our troops for their service.”

Star Wars: The Rise of Skywalker will be available to troops currently stationed in Iraq, Kuwait, Saudi Arabia, Afghanistan, and United Arab Emirates, as well as those other undisclosed locations across Southwest Asia.

But it is not just for one day. Star Wars: The Rise of Skywalker will be available to our troops for free beginning today, December 18, and running through January 5. The last installment of the Skywalker Saga opens to everyone else back State-side this Friday, December 20th.

Related: “Star Wars: The Rise of Skywalker” is the finale we needed, but maybe not what we wanted

The Walt Disney Company has always been a proudly American corporation. This free, early screening of The Rise of Skywalker is truly deserved and should make every American Disniac proud.

The Army and Air Force Exchange

Since its founding in 1895, the Exchange has been dedicated to providing a better quality of life for Soldiers, Airmen and their families. It provides exclusive military pricing for valued goods and services. Over just the past 10 years, its earnings provided over $2.3 million in dividends that supported military morale, welfare and recreation programs. The Exchange is the 62nd-largest U.S. retailer, and it is a non-appropriated fund entity of the Department of Defense. You can learn more about the Exchange at the official website here.

Do you know any Soldiers or Airmen deployed to the Middle East that will take advantage of this screening? Did you serve and get any special shows like this? Let us know in the comments!

Comments Off on Thousands of Deployed U.S. Troops Will Get Early “Star Wars” Screening