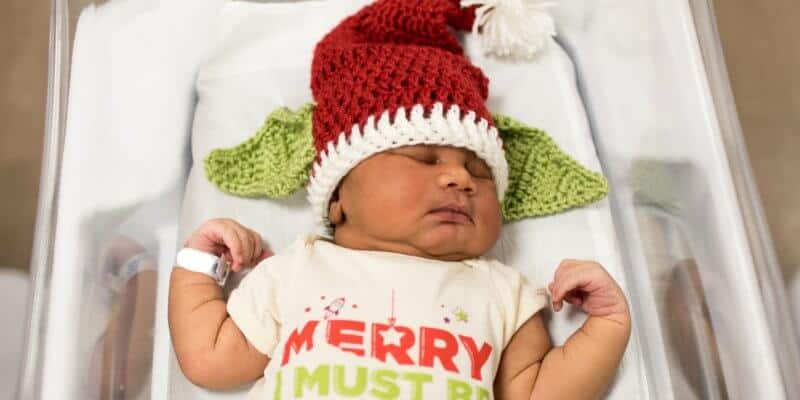 The force is strong with the newborns this holiday season, especially at one Pennsylvania hospital.

UPMC Magee-Women’s Hospital in Pittsburgh is dressing up the newborns in adorable Baby Yoda costumes.

This entire week the Pittsburgh hospital decided to spread the holiday cheer by placing the newborn babies in tiny onesies which showcased phrases like “Cute I am” and “Merry I must be”.

Santa caps were also placed on the newborns heads’, complete with green Baby Yoda ears which were actually crocheted by one of the nurses at UPMC Magee-Women’s Hospital, Caitlin Pechin.

Everyone loved the Baby Yoda costumes, but new parents Bri and Sean McGowan were overly excited as they are huge Star Wars fans themselves and actually just rewatched all of the Star Wars films during Bri’s pregnancy. The McGowan’s even themed their pregnancy announcement off of Star Wars.

“Ever since we watched ‘The Mandalorian’ when it came out, she looked at me and was like, ‘I want one. I want a Baby Yoda,'” Sean McGowan joked during an interview with his wife, Bri as well as their newborn son, Jackson.

Related: Some people are worth melting for!

The chief nursing officer, Patty Genday, shared that the hospital has had a tradition of dressing up newborns for the holidays for decades.

“It’s wonderful to see our parents look at their babies in these adorable little outfits and share them with everyone…it’s a great experience for them,” Genday said.

Fans of The Mandalorian have nicknamed the character, but Baby Yoda’s official name is “the Child” and at 50 years old, it’s safe to say that “the Child” is actually anything but a child, but that doesn’t make him any less adorable!

Related: Kids with Down syndrome pose as their favorite Disney characters – and it’s magical!

You can view the full album on the official UPMC Magee-Women’s Hospital Facebook page here.

How cute are these newborn babies in their Baby Yoda costumes? Share your thoughts with us in the comments.

Comments Off on PHOTOS: Pennsylvania Hospital Dresses Up Newborns As Baby Yoda