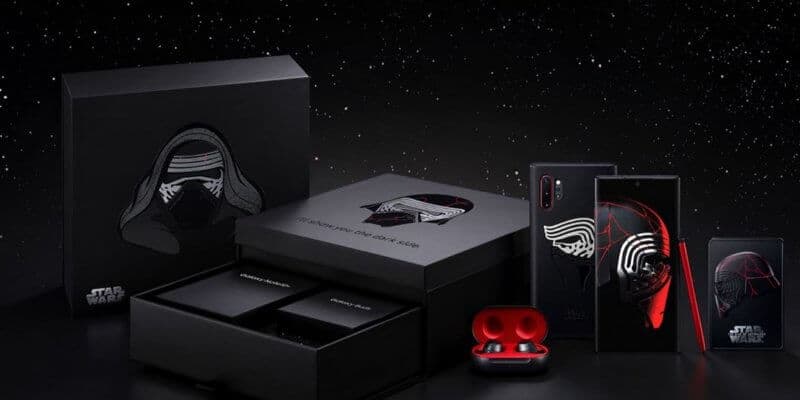 This Christmas will be extra special for Star Wars fans. Not only is Star Wars: The Rise of Skywalker blasting its way into theaters, but Samsung releases a special edition Star Wars Galaxy Note 10+.

The final chapter of Skywalker saga soars into theaters on December 20. Using Kylo Ren’s likeness, Samsung is hoping to lure followers to the dark side.  This special edition Star Wars Galaxy Note 10+ arrives on Friday the 13th of December. Unfortunately, the cost of this special Star Wars phone runs $1,300 US dollars.

This sleek, black edition of the Galaxy Note 10+ sports the image of Kylo Ren and an embossed leather case. The special Star Wars edition of the phone arrives, in limited quantities, with an exciting bundle of extras.

“Samsung announced a special edition Galaxy Note 10+ in advance of the December 20 release of Star Wars: The Rise of Skywalker. The collaboration will unite two Galaxies – a galaxy far, far away, and the Samsung Galaxy – to generate excitement for the final installment in the Skywalker saga. To commemorate this event, Samsung will release a special edition Galaxy Note 10+, featuring Star Wars-inspired design elements and digital content. This special edition device will be bundled with a specially designed case, a metal badge as a collector’s item, an S Pen, and Galaxy Buds. The bundle also comes with exclusive Star Wars-themed content including wallpapers, shutdown animations, icons and sounds for fans to enjoy.” –Samsung

Samsung’s Galaxy Note 10+ includes features like “Cinema-quality display,” “Pro-grade photo and video,” “zoom in mic” amoled display, and more. With a 16 MP camera and just under 28 hours of (up to) usage time, this Android driven device delivers on smartphone fun.

Looking for the ultimate Star Wars experience? Pair this Special edition Star Wars Galaxy Note 10+ with unlimited data service from Verizon. Doing so entitles users to a full year of Disney+! Enjoy every Star Wars movie and special series like the Mandalorian (exclusive to Disney+)

“The Galaxy Note 10+ Star Wars™ Special Edition will be available in select markets* beginning in December 2019, which is one of several interactions that Samsung and Lucasfilm have planned to bring a joyous colliding of two Galaxies. As Lucasfilm announced in early October, Samsung has joined forces with Star Wars to engage its passionate users with its best devices and the Galaxy brand in a new and exciting way. The special edition device adds to the collaboration between Samsung and Lucasfilm which includes the recently launched holiday campaign film, celebrating the theatrical release of Star Wars: The Rise of Skywalker.” – Samsung