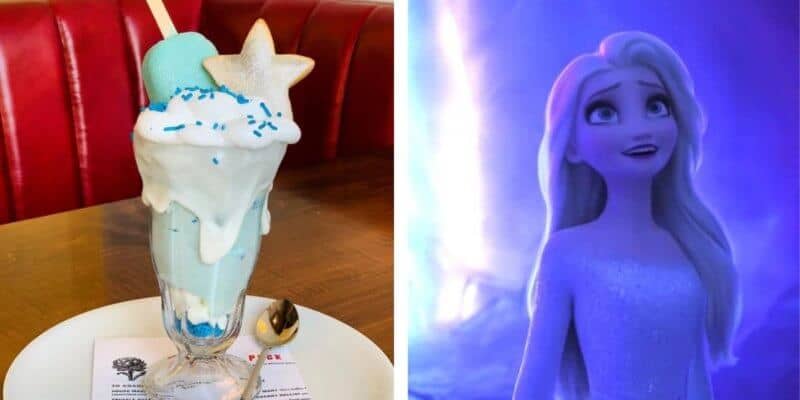 The highly anticipated sequel, Frozen 2, has finally arrived in theaters across the United States.

If you are visiting Walt Disney World this weekend, be sure to stop by AMC Theater in Disney Springs to see the film because Frozen 2 is on track to be Disney’s biggest sequel ever. The soundtrack, the storyline, the graphics — The movie as a whole is phenomenal.

After you swing by AMC Theater, stop by Wolfgang Puck Bar and Grill for a limited time, sweet treat themed off of the movie.

That’s right — The Snow Queen Sundae has just flurried into Disney Springs and can be found at Wolfgang Puck Bar & Grill, but for this weekend only!

The new Frozen 2 themed sundae consists of frozen gelato sundae mixed with sprinkles and mini marshmallows. It is then topped with marshmallow fluff, more sprinkles, a star sugar cookie, and a vanilla blackberry popsicle!

But this is by far the only Frozen 2 themed treat being offered at Walt Disney World. One of the most popular new Frozen 2 treats is the Frozen Waves Cupcake, available at Disney’s Pop Century Resort. This cupcake features buttercream which is iced to resemble beautiful waves, and then topped with sugar crystals, edible glitter, and a white chocolate piece of Elsa and the Nokk.

If you are looking for more Frozen 2 treats, click here.

If you want to visit Walt Disney World on your next family vacation, but aren’t sure where to being planning, then be sure to reach out to our trusty friends, the Authorized Disney Vacation Planners, who will be there with you every step of the way of planning your next magical vacation. They can help you book your resort reservation, dining reservations, and even book tickets to Mickey’s Very Merry Christmas Party! Click here for a free, no-obligation vacation quote from the Authorized Disney Vacation Planners at Academy Travel!

Do you want to try the new Snow Queen Sundae? Let us know in the comments.