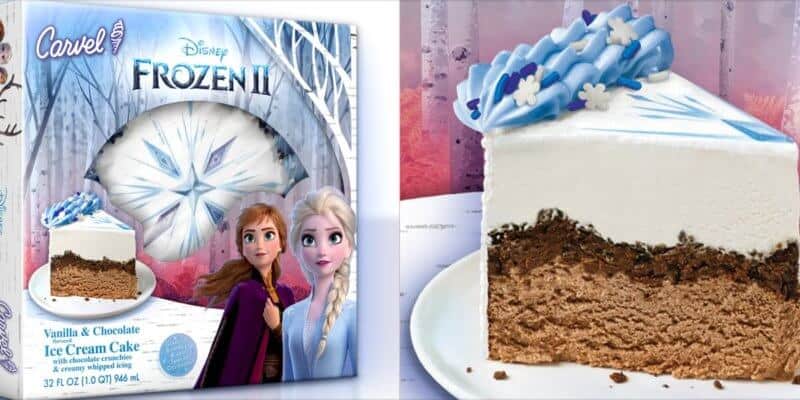 If you and your family are huge fans of Frozen then get ready because Carvel and Rich Products/I Love Ice Cream Cakes have just teamed up to release an all new, absolutely adorable, Frozen 2 themed ice cream cake!

This snowflake-themed cake is filled with creamy vanilla and chocolate ice cream and topped with delicious whipped icing. Of course, it wouldn’t be a Carvel ice cream without those iconic chocolate crunchies.

Adorned with the intricate snowflake from Disney Frozen 2, this ice cream cake is as beautiful as it is delicious. Underneath white and blue icing, you’ll find two layers of vanilla and chocolate ice cream separated by Carvel’s famous chocolate crunchies and whipped icing. Surprise a superfan by bringing home the magic of Disney Frozen 2.

The Disney Frozen 2 themed ice cream cake serves 6 people and will be available starting this month at major grocery stores. Some of the participating locations include Walmart, Publix, Kroger, ShopRite, and others. The Frozen 2 ice cream cake will cost $15.

Frozen 2 will follow the story of Queen Elsa, Princess Anna, and the rest of the Frozen gang as they go on a brand new remarkable journey. They have to find out where Elsa’s magical powers originated from so they decide to embark into an ancient land and magical forest.

When the advanced tickets became available on November 4, Frozen 2 broke records and now Disney holds the top three spots for the best initial day of ticket sales for animated films on both ticketing sites. (Toy Story 4 and Incredibles 2 are in second and third place on both platforms.)

Frozen 2 hits US theatres on November 22.

Will you be getting this new Carvel Frozen 2 ice cream cake? Let us know in the comments.