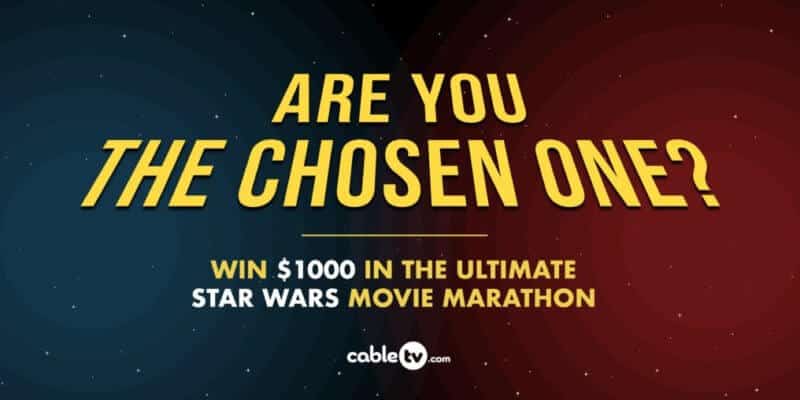 Are you a Star Wars fanatic? Do you love watching the films over and over again? Are you extremely excited for the release of Star Wars: The Rise of Skywalker on December 20? Are you the chosen one?

If you answered yes to all of the above, then this next “job” is for you!

An online company is currently looking for someone to watch every Star Wars film back-to-back prior to the release of the upcoming Star Wars: The Rise of Skywalker. And the better news? They will pay you $1,000!

CableTV.com is on the lookout for a Star Wars fan who can commit to watching all 10 films, which totals 22 hours and 25 minutes, as well as live Tweet about their experience.

“We’re looking for an entertaining Star Wars junkie with a Chewbacca-sized personality, the wit of Han Solo, and the smarts of Master Yoda . . . well okay, maybe not that smart,” the job application reads.

“Point out parts of your personality that make you stand out from the crowd. Can you telepathically lift an X-Wing from a swamp? Or do you have Palpatine’s persuasive powers? Let us know what makes you the chosen one,” the job description also reads.

The 10 Star Wars movies, which can actually be watched in any order as long as they are watched back-to-back, include:

But once again, that’t not all! Because along with receiving $1,000, the chosen Star Wars binger will also receive all 10 films on Blu-ray, a Nerf Han Solo Blaster, a Chewbacca onesie, and an R2-D2 Popcorn Popper!

If you are interested in being the Star Wars bingers, you can apply online by filling out an online application form and writing why you’re the best choice to watch this space saga (in 200 words or less).

Applications are due by December 11 at 7 pm and the job must be completed before December 20, which is when Star Wars: The Rise of Skywalker is released.

May the force be with you.

Do you think you have what it takes to be CableTV’s Star Wars binger? Apply today!

Comments Off on You could be the ‘chosen one’ and earn $1,000 to watch every ‘Star Wars’ movie