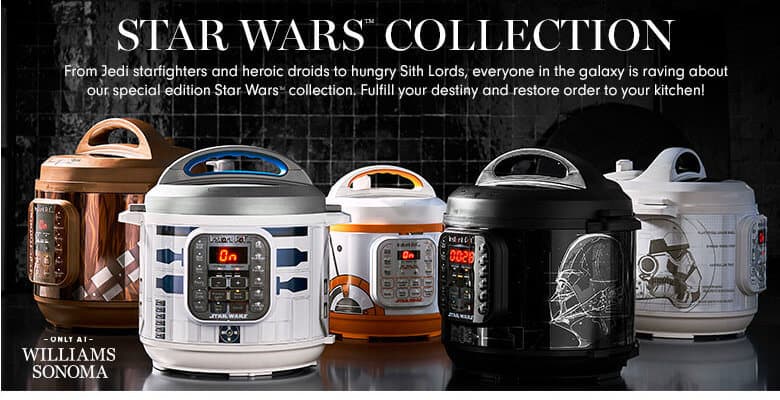 Blast off your dinner into a galaxy far far away with these new droids, ahem, Instant Pots inspired by our favorite Star Wars characters.

Williams Sonoma just released an Instant Pot Star Wars Collection and the force is too strong on these to resist!

The Star Wars fan in your family will be able to make meals in light speed with these galactic Instant Pots. The Instant Pot multi-cooker has been the newest rage in kitchen appliances helping cooks in this galaxy and beyond shorten their cooking times by up to 10 times using up to 70% less energy.

We’ve experienced this magical kitchen device and can vouch for its awesomeness in making mealtime easier and tastier in shorter amounts of time, keeping the tiny droids in the tribe fed and happy.

Williams Sonoma had already been using the force on us with the Star Wars Le Creuset Collection. But they’ve upped their Star Wars game with this new Instant Pot collection keeping the force with us, always… in the kitchen!

Last but not least, for that Wookiee-sized appetite, the Chewbacca Star Wars™ Instant Pot® Duo™ 8-Qt. Pressure Cooker. This style is priced at $119.95.

Make sure you sign up for the Williams Sonoma mailing list so you can score a 15% off coupon to use on your next Star Wars Collection Instant Pot purchase. We wouldn’t be mad if this was under the tree on Christmas morning!

There is so much Star Wars excitement to look forward to in the near future! With the new attraction set to open soon at the Walt Disney World Resort and later at the Disneyland Resort, Star Wars: Rise of the Resistance, and the upcoming film, Star Wars: The Rise of Skywalker, what are you most excited about? Let us know in the comments. We cannot wait to experience it all!