Disney+ has finally launched, America has started streaming, and aside from a few error messages and glitches here and there, Disney fans in the U. S., the Netherlands and Canada are rejoicing today as the all-new streaming platform is available at last. 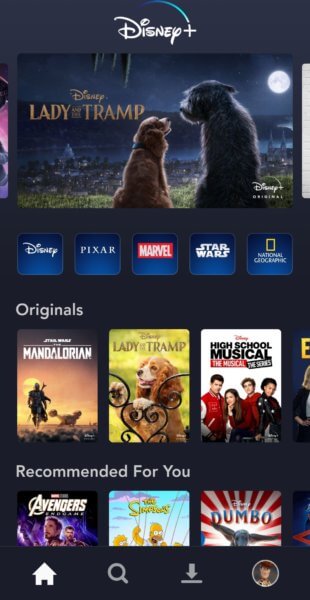 The streaming service debuted with almost 500 films and 7,500 TV episodes, and this morning, Disney announced even more details about Disney+.
We know that the Disney+ direct-to-consumer service will “launch in most major global markets within its first two years,” and on November 19, Disney fans in Australia, New Zealand and Puerto Rico will get to experience Disney+ for the first time. And Disney had previously announced that the service would launch in March 2020 in Western Europe–the United Kingdom, Germany, France, Italy, Spain and “a number of other countries in the region.”
But perhaps the most exciting news today is that about debut times for new episodes of Disney+ original series, such as the highly-anticipated Mandalorian series starring Pedro Pascal–the first-ever live-action series in the Star Wars family–High School Musical: The Musical: The Series about the real-life East High School that’s featured in the High School Musical films and The World According to Jeff Goldblum, a new National Geographic docuseries.
We had previously heard that The Mandalorian would drop its new episodes every Friday, but Disney hadn’t specified a time, until today. This morning, we learned today that beginning this Friday, November 15, most of the new episodes of The Mandalorian and other original series will premiere at 12:01 a.m. Pacific Time on Fridays. Fans rejoice! (And set your alarms!)
In a press release this morning titled, “Disney+ Lifts Off, Ushering in a New Era of Entertainment from the Walt Disney Company,” Chairman and CEO Bob Iger said that the launch of Disney+ “is an historic moment for [the] company that marks a new era of innovation and creativity.”
The release went on to describe the new streaming service: “Disney+ provides an exceptional entertainment experience, showcasing our library of beloved movies, TV series and exclusive original content from Disney, Pixar, Marvel, Star Wars and National Geographic.”
On Monday, just hours before the launch of Disney+, Digital TV Research predicted that the new streaming platform would reach over 101 million subscribers by 2025.
Disney+ will feature original content made exclusively for the new streaming service, and it will feature TV episodes of Disney Junior and Disney Channel shows. The new live-action Lady and the Tramp also debuts on Disney+’s the only place you can find it!

What content have you been streaming today on Disney+? Don’t have a subscription yet? There are plenty to go around! Get yours by visiting the Disney+ website so you can stream with the best of them!