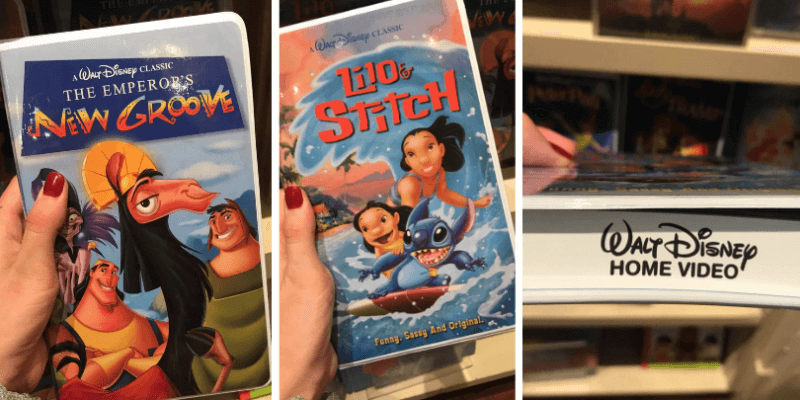 Calling all 90s kids! Disney has released some all-new VHS notebooks, and these ones are totally revamped versions of the original notebooks we’ve seen in the parks for quite some time. The new Disney VHS notebooks are the same size and feel as original VHS cases you may remember from the 90s and early 2000s.

So far, we have spotted two of the new versions of the Disney VHS notebooks: one themed after Lilo and Stitch and another themed after  The Emperor’s New Groove. A third one themed after Toy Story is also available. As fans of these early 2000s Disney films, we couldn’t be more thrilled to see these two movies being represented on Disney merchandise.

The new versions of the Disney VHS notebooks are $19.99 before the annual passholder discount. The old versions, which you can see below for comparison, are $16.99 and include Lady and the Tramp, Dumbo, Peter Pan, The Little Mermaid, and others in the lineup. Compared to the old versions — which just have the same front and back design of VHS cases — these new notebooks are a lot sturdier and more structured, with vinyl-like covers that have the same shine and feel as the VHS cases we remember as kids.

The new versions of the notebooks also have “Walt Disney Home Video” printed along the bottom pages, as you can see below. This is such a creative touch that any Disney fan would appreciate, especially those who remember that same title stamped along the bottom of the Disney VHS cases from when you were kids (or from when your kids and grandkids were little!).

We spotted these new Disney VHS notebooks — along with the other notebooks in the previous version — at 20th Century Music on Main Street, U.S.A. in Disneyland, but they are also sold at other merchandise locations throughout Disneyland Resort and Walt Disney World Resort. Be sure to ask a Disney Cast Member if you are unsure of where you can purchase them, as these are sure to be popular!

When we stopped by 20th Century Music to check out these new versions of the Disney VHS notebooks, the Cast Member we spoke to said that so far the  Lilo and Stitch, Toy Story, and  Emperor’s New Groove versions of the notebooks are the only new ones available, but Disney will soon be rolling out the new versions with the old designs as well as new designs in the coming months. Stay tuned for what’s to come in this collection!

Want to head to the Disney Parks to pick up some awesome merchandise like this for yourself? Book a Disney vacation with an Authorized Disney Vacation Planner at Academy Travel, who can offer expert tips and tricks for the Disney trip of your dreams. Click here for a free, no obligation vacation quote from Academy Travel.

What do you think of these new versions of the Disney VHS notebooks? Let us know in the comments!