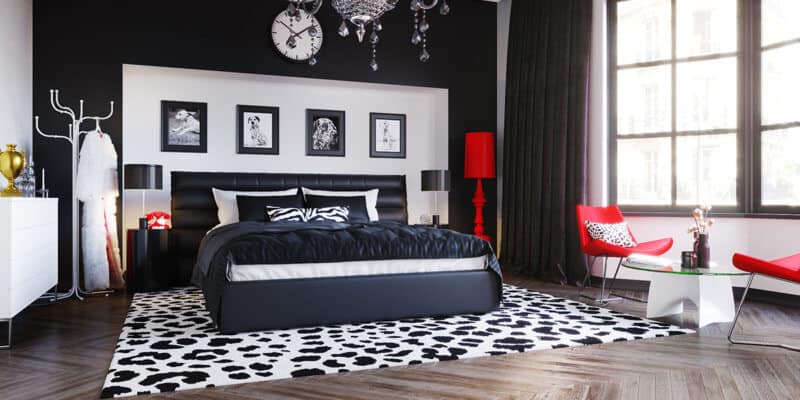 Ever wondered how some of Disney’s most notorious villains would decorate their homes if they lived today in 2019? Well–look no further! Angie’s list put together a series of images capturing some of Disney’s Villain’s most iconic color schemes and prints into six different decorated rooms and the results are sinisterly-stylish!

Starting with the evilest fairy queen of all: Maleficent. Most remember from “Sleeping Beauty” that Maleficent lives in the castle atop Forbidden Mountain. However, pulling from the evil style of her black and purple robe, golden staff and black horns, Angie’s list went all in with an evil and enchanting bedroom design.

For their design, they took Maleficent’s black horns and instead decorated with antlers. Then they took the green of her skin and the castle in the original movie to include in small elements around the room. Some of which include the plant and the glowing orb on her staff.

Taking from the deep purple found on the inside of her robe, the designers incorporated the color in different pieces around the room. This included two armchairs and the drapes.

Next comes a room fit only for a sea witch, one most famous for taking princess Ariel’s (“The Little Mermaid”) voice: Ursula! And in this room, she’d feel right at home in the ocean. This modern bedroom, features a blue wave-like wall and bedding, curtains and chairs all colored similarly to the sea.

Other elements found in the room, including the seashells, coral, and starfish decorations are taken straight from Ursula’s original lair. The plant was used to add a hint of seaweed and the hanging lamp for its similar appearance to an octopus.

Now on to a Disney Villain is both menacing and stylish: Cruella De Vil. When designing this room, the designers wanted to incorporate clean and sharp lines–similar to Cruella’s cheekbones. The designer’s also pulled from her appearance for other elements in the room. Some include the black and white on the curtains, walls, furniture, and bedding in reference to her black and white hair, black dress, and white coat.

The designers also wanted to incorporate De Vil’s use of red, which they made sure to incorporate in different accessories around the room including two chairs, a lamp, and a telephone. For those who might not remember, the red phone is a nod to Cruella’s bedroom telephone from the original movie with more modern lines and buttons.

This next style is fit for a sultan–or someone who would try to take the place of one: Jafar. A man with such a desire for power would more than likely have a luxurious room, which is exactly what the designers were thinking for this design.

Designers reflected Jafar’s Arabian roots with a large Persian rug, ornate prints and designs, and the golden, desert-like wall. They also included a birdcage for Iago, his snake-like staff, and a golden lamp

This queen would like to be the fairest of them all. However, she may only be the most stylish. The Evil Queen from “Snow White & The Seven Dwarfs” is known for rich and royal colors and fabrics, which is exactly what these designers were going for with this next design.

Angie’s List wanted to capture in this room the queen’s look from when she appears in a long, velvet traveling cloak, a deep purple dress, lined with white; and a golden crown and brooch. And looking around this room, it seems they hit the nail on the head.

Other themed design elements found in the room from the original movie include an intricately designed peacock throne; a blue and gold star-spangled banner; and the famous mirror (a revamped version) hanging over the bed. The room also includes the queen’s skull, which is used as a pencil holder.

Most know Tamatoa as the villainous giant crab that covets all things shiny and valuables and that’s exactly what Angie’s list wanted to capture when creating this room. The room is fully decked out in everything gold and shiny–similar to what you’d find in a criminal’s loot.

Designers took inspiration from the sea and included deep blues, greens, and browns when putting together the room. An element that really stands out and rains true to the villain is the treasure chest, which also features a modernized version of Maui’s fish hook. The bedside table lamp was inspired by Tamatoa’s ability to turn bioluminescent in pitch darkness.

What are your thoughts on these Disney Villain-inspired rooms? Let us know in the comments!