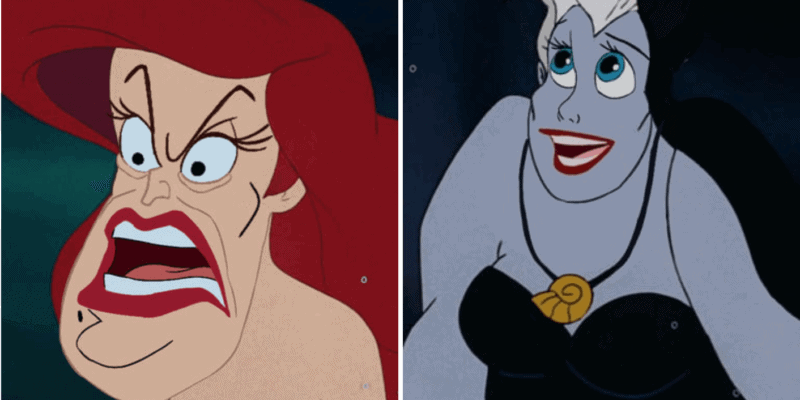 The stories of the Disney heroes and villains are forever ingrained in a Disney fan’s soul as for most they are the first stories they see on the big screen growing up. However, how funny would it be if someone were to take these characters and swap their faces? Well, this man did just that and we can’t stop laughing about it.

Pedro Fequiere, a Staff Writer at BuzzFeed, sat down and photoshopped the faces of some of the most iconic Disney heroes and their arch nemeses and the results are almost maddening. For the majority of the images, the characters have different face sizes. Although, through the power of the photo manipulating tool, Fequiere was still able to seamlessly swap the faces of these beloved characters and the results are just so funny to look at.

Take a look at these Disney heroes and villains face swap images below:

A Disney villain has never looked dreamier. However, with Gaston’s evil smile, we don’t think the Beast would be so smitten with the Disney Princess.

Yzma is known for her quick-wit. But, in this portrayal, she seems a little confused–or tired. And with Yzma’s face, Kuzco has never looked so bothered!

With Aladdin’s face, Jafar seems quite the trustworthy advisor to the Sultan. Although, we’re not so sure we’d accept a stolen fruit from Aladdin in this state as it could be poisoned.

The son of Zeus looks a lot less mighty with Hades’ face. Although, what really stands out the most from the image is Hades’ eyes, which are more scary than funny in this scenario.

Governor Ratcliffe looks so friendly with Pocahontas’ face, we’d probably give him our land! But, as for Pocahontas, we’re not so sure she can really pull off the Governor’s face on her body in any capacity.

With Sid’s face, we can’t say confidently that we’ve got a friend in Woody. Although, Sid does look a lot less vile and cruel with Woody’s face.

Mulan looks far from ready to get down to business with Shan Yu’s face. And with Mulan’s face on Shan Yu, the evil tyrant looks nice enough that he may be up to sparing some of his enemies’ lives.

We know Tiana works hard, but with Dr. Facilier’s face, she looks as if she’s been worked tirelessly.

What are your thoughts on these hilarious face swap images of Disney heroes and villains? Let us know in the comments below!