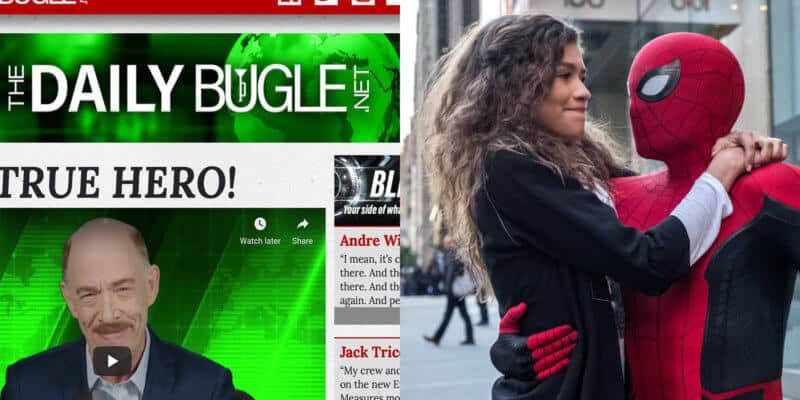 “Spider-Man: Far From Home,” a joint cinematic endeavor from both Sony Pictures and Marvel Studios, became Sony’s highest grossing film ever–and as the movie heads to home entertainment release on October 1, the company has decided to release a “Spider-Man is a Menace” video and launch a real life Daily Bugle website.

“Spider-Man, a psychopath wielding powers he has no right to possess, trying to pass himself off as a hero,” Jameson screams in the video. “Well, let me tell you something, kid, you’re no hero! Mysterio, that’s a hero. You are a criminal, a miscreant, a masked marauder, a menace!”

J.K. Simmons (who portrays J. Jonah Jameson) was first seen in Sony Pictures 2002 “Spider-Man” film series starring Toby McGuire in the same role. In a shock to fans, Simmons came back to play the head of the Daily Bugle once again in “Spider-Man: Far From Home” and can be seen in the video above.

As part of the release of the new video, it also comes with the debut of a real-life Daily Bugle website. Yes–you read that right. Sony has launched a Daily Bugle website featuring blog posts and articles you can actually read from the fictitious newspaper that first appeared in the original Spider-Man comics.

At this time, it’s not known what is to come of the current “Spider-Man” series starring Tom Holland. As we all know, Sony Pictures recently pulled out from its deal with Disney, which helped develop the character’s stand-alone films and maintained its inclusion in Marvel Cinematic Universe movies. However, it has been revealed that the company plans to do at least two more films with Tom Holland’s web-slinging character.

From this new video above, it’s probably safe to say that Simmons will return to the famed Marvel franchise in the next film. Especially since the newscaster ended “Spider-Man: Far From Home” on quite the cliff-hanger.

What are your thoughts on Sony creating a real-life Daily Bugle website? Let us know in the comments below!